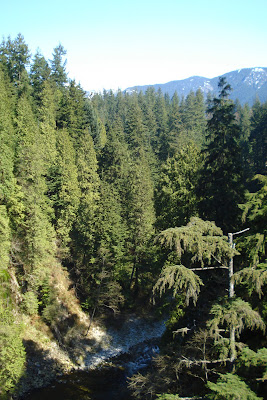 The first suspension bridge was constructed in 1889. Chief August Jack Kahtsahlano and his brother Willie helped to build it. The original bridge was made of hemp ropes and cedar shake boards. It was known as “The Laughing Bridge” because of the sound the wind made as it strummed on the hemp ropes. George Grant Mackay was the first pioneer to live at the bridge site. His house, completed in June 1889, was the first house in what would some day become a prestigious residential area. Mackay later sold his property to wealthy German land speculator Bruno Stetzer, who authorized the building of a steel cable suspension bridge 450 ft. long. The new bridge was officially opened August 8, 904. It was constructed with two single strands of steel cable strung across the canyon and anchored to huge logs buried in the ground and mounded over with rocks and earth.

The Capilano property was sold to Edward Mahon, a Yorkshire man who came to B.C. in 1889 as a miner. He had established a camp called “Castelgar” named after his ancestral home in Galway Ireland. He was a 48 year old bachelor when he bought the Capilano site. When he married Lilette Rebbeck of Victoria, she and her mother and three Japanese servants moved to Capilano. The first pioneer baby born in the Canyon was a baby girl born to the Japanese servants in November 1910. 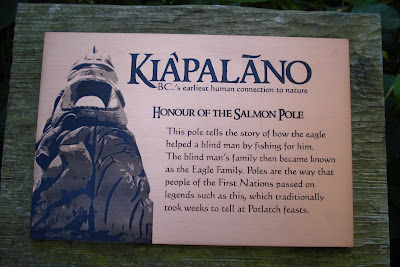 Mahon built the Teahouse in 1911 at a cost of $4500. It was situated 100 feet above the canyon near Mackay’s cliff house. The gardens were landscaped by the Japanese workers with the assistance of Mrs. Rebbeck who as a landscape designer and gardener. There were beds of daffodils, crocuses, primulas, roses, perennial plants, rhododendrons, azaleas and ornamental trees. Some of these original gardens still remain in the park.

By 1914 the park was a popular place for visitors. Electric trolleys and an improved ferry service brought people across to North Vancouver. From the ferry dock they walked two kilometeres up Capilnao Road to the suspension bridge. Later tour buses and taxis provided transporation for the sightseers. Motor clubs also included the Bridge in their outings. Mrs. Rebbeck prepared food and hospitality for her guests.

Because of its popularity, the bridge was reconstructed in 1914 and was advertised as “The Eight Wonder of the World.” The price of admission was only 10 cents collected by a gatekeeper. At this time,Mrs. Rebbeck lived alone in the cliff house. She raised goats and chickens and hired girls to help as waitresses. They lived in the Teahouse (now the Trading Post).

Because of rationing during the First World War, there was a lack of staples so fewer visitors came to the canyon. At that time the government enacted legislations for the serving and preparation of food in public eating places and Mrs. Rebbeck was given a license. A new gatehouse and store were built and when Mrs. Rebbeck married Mac MacEachran, the district fire warden and forest ranger, many new additions and expansion were made including the building of a pergola where light meals were served.
During the Great Depressions, two Danish carvers came to the canyon looking for work. Aage Madsen and Karl Hansen were hired by MacEachran who gave them lodgings in return for carvings. Some of these outstanding carvings are still on the grounds. One is the carving of Chief Mathias Joe’s mother. Chief Mathias Joe and other local Natives were invited to place totems in the park. These original totems are still in the park.

The Capilano Suspension bridge wa purchased from MacEachran in 1945 by a French restaraunteur Louis Henri Isadore Aubeneau. He also bought the MacEachran home which was situated across the road from the bridge. This is now the Bridge House Restaurant. During this time, the park became neglected and many of the carvings of Madsen and Hansen were covered with tar, supposedly to preserve them. In 1953 the bridge and park were sold to Douglas McRae who cleaned it up and made improvements. The Tea Room was reopened and a banquet room was built to accommodate weddings and receptions. In 1956 the bridge had major repairs with prestressed wire cables tested by British Wire Rope. Aaje Madsen came for a visit and was hired to restore his carvings.

In recent years, Stan Joseph, grand nephew of Chief Mathias Joe, has restored the park totems. Joseph, whose Squamish name is Sequilem was born on the Capilano Reserve in 1950 and has been carving totems since he was twelve. His work is internationally known. New totems have been added to the park. At the entrance is the magnificent Centennial Pole, carved by Stan Joseph.

The Capilano Suspension bridge is the oldest commercial tourist attraction in the Vancouver area. It embraces the cultural influence of the First Nations people and early settlers, Japanese and Europeans. It is an important legacy of this area’s history. 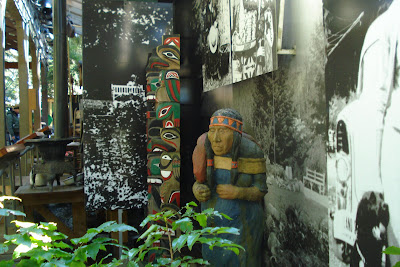 Anonymous said...
This comment has been removed by a blog administrator.
11:13 a.m.

Once i was read a brief content about THE CAPILANO SUSPENSION BRIDGE in online cheap essay writing service. after that.hear i am reading a details article about the topic. anyway, its a fantastic article and thank you so much for the share

nice piture and in vietnam so good !

Dora said...
This comment has been removed by a blog administrator.
3:43 p.m.

Visit my niche travel blog Trips Gear searches hundreds of other travel sites at once to find the information you need to make the right decisions on flights, hotels & rental cars. TRIPSGEAR

Excellent post but I was wanting to know if you could write a litte more on this subject? I’d be very grateful if you could elaborate a little bit more. Thanks!

This pretty well covers it all. If you want more info go to their website.

Thanks for sharing with us, keep posting
Thank you!!!.

This is such an amazing post. Loved reading it. Looking for some adventure,
Iceland

Nice article and I agree that this is really a natural wonder. Big thanks for sharing.

Hiya, I’m really glad I’ve found this information. Today bloggers publish just about gossips and web and this is really frustrating. A good site with interesting content, this is what I need. Thanks for keeping this web-site, I’ll be visiting it. Do you do newsletters? Can not find it.

I have been surfing online more than three hours today, yet I never found any interesting article like yours. It’s pretty worth enough for me. Personally, if all site owners and bloggers made good content as you did, the net will be much more useful than ever before.

Great job for publishing such a beneficial article. Your blog information isn’t only useful but it is additionally creative with high content too.

This is a worth reading article.