WALKS WITH RUTHAKI #4: A MEDITATION WALK ALONG THE FORESHORE 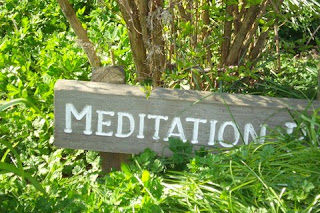 On Good Friday I took a neighbourhood walk down to the foreshore where there are three little parks overlooking the harbour and Burrard Inlet.  The first one is called "The Meditation Park".  I love to go there and sit on the bench enjoying the view and contemplating life. 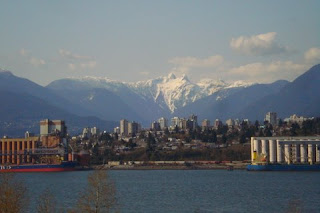 The mountains that day were incredibly clear and I had this wonderful view of The Lions, one of Vancouver's most famous landmarks on the North Shore.

You get a good view of the Burrard Inlet shipping lanes and docks from these little parks.  You're no longer allowed to go down along the road that leads along the waterfront, but from up on the foreshore ridge you can see east and west and take in the views of our industrious harbour. 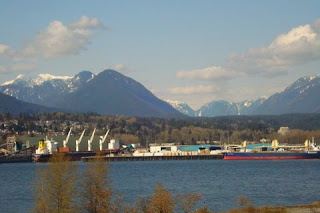 A little farther along at the next foreshore park, there are pretty flower gardens and lovely houses with interesting yards.  There are flower beds along the curbs as well.  It's a quiet street, not much traffic, and when I ride my bike I often come along here and cycle down to New Brighton Park where there is a swimming pool and a pleasant green picnic or play area as well as walks along the shore. 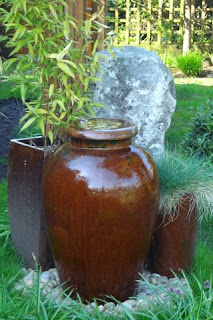 This is one particularly attractive little 'fountain' set up in one of the yards.  I think it fits very well with the theme of 'meditation'. 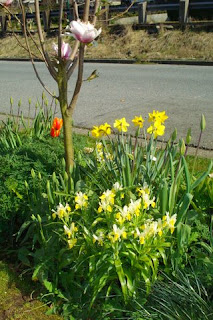 I love this little curb side garden with a flowering magnolia and some interesting small irises.  I learned recently that the magnolia has been around since the age of the dinosaurs.  The reason it has no leaves is because it is pollinated by beetles.  Isn't that interesting?  At this time of year there are lots of magnolias (also called 'tulip trees') blooming around Vancouver. 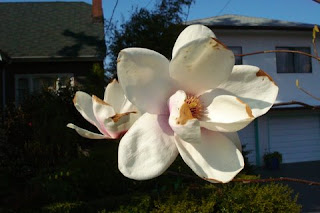 This day I didn't walk as far as New Brighton, but stopped at each of the 3 little meditation parks to rest and clear my head.  After all, it was a day of meditation.  Then I walked back up one of the quiet residential streets and, as usual, took a different route to look at the lovely old houses and gardens along the way back to my home. 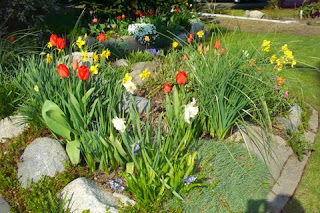 WALKS WITH RUTHAKI #3: A Sunday Walk in Stanley Park 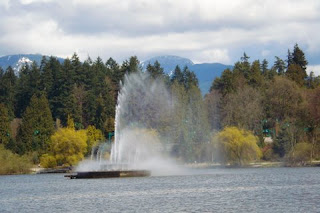 Lost Lagoon Fountain, Stanley Park
﻿
There's nothing nicer on a mild Sunday than a long walk in Stanley Park.  Last week I didn't participate in the annual Vancouver Sun "Fun Run", instead I went on a marathon walk of my own through the quiet paths and around the lagoon at Stanley Park.

It turned into a longer walk than anticipated because the bus routes were blocked off due to the Fun Run, but I wandered down from Robson and Denman Street to the edge of the Lagoon and set off from there.
There were lots of birds in the lagoon this day. It must have been the Blue Heron's nesting time as I saw an unusual number of them by the shore, as well as the usual gaggles of geese, ducks and swans. 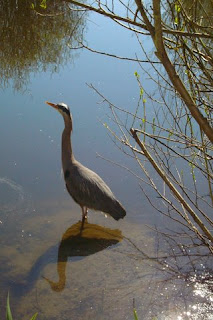 Instead of taking the seawall walk, this time I cut through the Park via the road and walking under the big trees, stopping now and then to enjoy the views of English Bay and the Burrard Inlet.  My destination was the Ferguson Point Tea House as I had discovered a forgotten voucher for a meal that I had and wanted to use it before it expired.  As I learned later, I could have easily reached the Tea House by the seawall, but the stroll through the forested part of the park was a nice change. 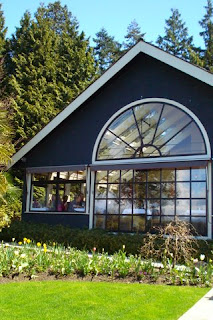 Ferguson Point was originally the site of an army a garrison and the Tea House was once a mess for officers stationed there during World War II. Later it was used as a residence for the military, until the 1950's and opened as the Ferguson Point Tea Room in 1978.
It's a pleasant place to go for brunch, afternoon tea, or late lunches with a beautiful view of the Inlet from the windows.  It's a cozy atmosphere, and the day I was there the tables and couches were occupied by a lot of family groups.  I enjoyed a meal of fish and chips and a refreshing margarita. 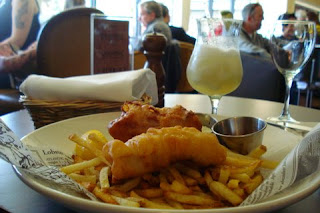 After my lunch I walked back along the seawall.  There were lots of walkers, joggers, cyclists and in-line skaters out that day enjoying the fresh air and sunshing.  The seawall is always one of my favorite places for a good long walk with stops now and then on the benches to enjoy the views and meditate. 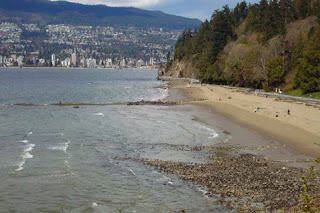 Third Beach
I walked along as far as Second Beach and cut back through by the Lagoon Path into the Park itself where the Spring flowers are in bloom.  There were cherry blossoms and the flower beds were bright with daffodils, hyacinths and other spring blooms.  I enjoy strolling the gardens in the Park and walked through back to the bus loop just behind the Malkin Bowl tea house/restaurant. 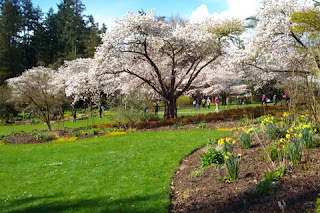