THE HISTORY AROUND US 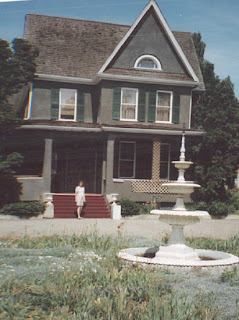 
I've been interested in the Pioneer history of Canada since I was a child. Growing up on the Prairies at the end of the Great Depression, I was fascinated by the local Native bands who would troop into our small town. I used to fantasize about living back in the time of the early Pioneers or often pretend I was an Indian child. My first historical writings, when I was 12, were inspired by the long cross-Canada train trip my family made from Ontario to British Columbia, over the vast Prairies and through the majestic Rocky Mountains to the Coast. I began writing stories in lined scribblers, in pen or pencil, illustrated with my own drawings or pictures clipped from magazines to represent the various characters. I still have these early writings in an archives box.

There is history all around us. One only needs to take time to explore, investigate, research.
On a trip to the B.C. Interior last summer, my friend and I visited the historic O'Keefe Ranch.
Located in the Okanagan valley just north of Vernon, this was once the largest cattle ranch and the longest family operated ranch in the Province. It was founded in 1867 by Cornelius O'Keefe who, along with his partners, were driving cattle north to the gold fields from Oregon. Impressed by the vast fields of lush grass they decided to buy land and raise cattle themselves. By the turn of the century they owned 20,000 acres.

The ranch was self-sustaining and included not only the impressive mansion O'Keefe built for his growing family, but the first post office and first Catholic Church in the North Okanagan.
After O'Keefe's death in 1919 the ranch was operated by his youngest son Tierney O'Keefe, until 1967 when it became an historic site. Now you can tour around the Ranch and take a step back into Pioneer history. My friend and I spent a pleasant afternoon wandering around the Ranch. We were especially impressed with the mansion and its furnishings and the many other exhibits including a cowboy museum. I've written a story about the Ranch which I hope to market to local publications.

This weekend I'm heading up to the Okanagan again, this time to Shuswap Lake, new territory for me to explore. I took some time to investigate and located a couple of publications in the Public Library that outline the history and legends surrounding this Lake and the area where it is located. There's lots of material for another local history story.

It makes your travels more interesting if you take time to read up on the destination (local or afar) and find out the specific historical background of the place. Even in the city of Vancouver there are many historical sites to explore including some of the elegant Victorian mansions that have been turned into museums. The family stories behind those houses are fascinating. Recently my Memoir group visited the beautiful old Roedde House and I was amazed at the intriguing story of the Roedde family. I'd never have guess, nor would I have known this interesting bit of local history if we had not taken the time for that visit.

So get out there, look around, find out about the wealth of history around you!

DREAMING OF AN ISLAND PARADISE

"I must down to the seas again, to the vagrant
gypsy life,
To the gull's way, and the whale's way where the
wind's like a whetted knife;
And all I ask is a merry yarn from a laughing
fellow rover
And quiet sleep and a sweet dream when the long
trick's over."
John Masefield (18-78-1967) "Sea Fever" st. 3

I gave my memoir group a ten-minute timed writing assignment this week on the subject
"If you had a pair of ruby slippers like Dorothy in The Wizard of Oz where would you want them to take you?" This is what I wrote:

Ruby Slipper Dreams of a Tropical Island Paradise
I've always dreamed of going to a tropical desert island. For several years I've thought of making a trip to the Cook Island in the South Pacific. Tahiti is my island paradise of choice, but I understand it's way beyond my price range.
Tropical desert islands have appealed to me since I was a child, sparking my wildest imaginings as I read books like Treasure Island and Mutiny on the Bounty. The musical South Pacific appealed to me too, because of Bali Hai.
I've often browsed through brochures and travel magazines, day-dreamed over photographs of brilliant turquoise seas lapping on pristine white beaches strewn with the occasional palm tree. My idea of a perfect vacation would be to live in a grass shack on the seashore on one of those tropical paradises.
The realization of this dream/fantasy may not be far off. The other day I was browsing the internet looking at sites about Malaysia. I've won a six day trip to Kuala Lampur and it includes three days at a place called Langkawi. Much to my surprise and delight, I learned that Langkawi is one of a group of tropical desert islands off the North East coast of Malaysia not far from Thailand. It isn't a well-known tourist spot as yet and obviously the Malaysian tourism is touting it as a possible destination. (It was sheltered and so escaped the destruction of the recent tsunami that devasted so much of the coastline and islands in that area.) I'll be a media guest of the Malaysian tourism and I knew they'll expect me to write something about this island group.
Now here's the dilemma. I'd hoped to go to Malaysia between mid November and mid January
however I've found out that's the rainy season and if you want to enjoy the beaches there, it's not a recommended time to go. Of course I wouldn't want a tropical rainstorm to spoil my long-dreamed-of trip an island paradise, so now I'm rethinking my trip plans. It looks like March will be a better time to go. At any rate, after all these years my dream is finally going to come true, and what's better: it's all expenses paid courtesy of Malaysian Tourism.
I might get to stay in a grass shack on a tropical beach after all. I just hope there won't be a danger of another tsunami!
"If there is a paradise on the face of the earth,
It is this, oh! it is this, oh! it is this." Anonymous.
Stay tuned for more about travelling to Malaysia!
Posted by Wynn Bexton at 1:59 p.m. 3 comments: