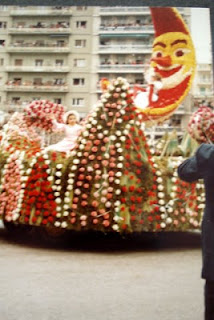 GREEK CARNIVAL
If you’re sightseeing in the middle of Athens in February and you’re suddenly descended upon by a roving gang of young men wielding plastic bats, don’t be alarmed. They hit people over the head, but the head-bonking is part of the playful merriment that is apokries – carnival


Since ancient times, the Greeks have celebrated carnival with pre-Christian rites. Carnival comes from the Latin “Carne Vale” (farewell, flesh) and is the feast before the fast – triodio, three weeks of revelry preceding Lent. It is the Greek version of Mardi Gras.
You can detect a hint of the ancient Dionysian festivals in the celebrations. Groups of professional mummers used to roam the streets of Athens performing dances and pantomimes. Now, costumed revellers prowl the cobbled streets of the old Plaka district, bopping each other with the plastic hammers. Tangles of coloured streamers and confetti are tossed with abandon. There are private parties and celebrations at some of the hotels. Shop windows display extravagant costumes and masks.
In rural areas, plays and satires are performed, including the Funeral of the Miser, whose soul is taken by devils. In the Peloponnese region, a masked effigy of the King of the Carnival is carried on a bier and then set on fire. In ancient days the mock king was actually put to death. These rites are all symbolic, some dating back to Agamemnon’s time. One ritual is a mock wedding in which the groom is murdered and then resurrected, followed by a symbolic pantomime of plowing and sowing – nature’s renewal and the return of spring. These are similar to the rites of Dionysus, the ancient god of revelry and resurrection.
Even with the pagan holdovers, the religious meaning of this period is strictly observed. The first week, called profoni, is the time in which the fattened pigs are slaughtered and prepared for the feasts of the second “meat-eating week.” During profoni, it is believed the souls of the dead are set free and wander among the living.
On each of the three Saturdays of apokries, prayers are said and the koliva, a dish made of wheat, is prepared and consecrated, then distributed among friends and neighbours in memory of deceased relatives. On the second Thursday of apokries, the pork feast begins and so does the masquerading. In the third week, only dairy foods and eggs may be eaten, in preparation for the long Lenten fast. 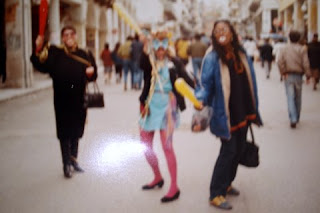 My friends and I celebrate Apokries at Patras. (I'm in a butterfly costume!)
Tirokiriaki (Cheese Sunday) is the most vibrant day of the celebrations and includes dancing, masquerades, parades and play-acting. The most spectacular parad is held in the Peloponnese at Patras. Busloads of carnival merry-makers arrive from Athens and the surrounding villages, flooding into the streets of the small port city, swinging their plastic bats, tossing rainbow coils of paper streamers and confetti and squirting one another with coloured plastic foam from aerosol cans.
Carnival is particularly appealing to children and each weekend of apokries the Zappeion and National Gardens in Athens are filled with youngster, masquerading clowns, fairies, musketeers, demons and fantasy creatures. Adult merriment begins at night. Take along your bat. 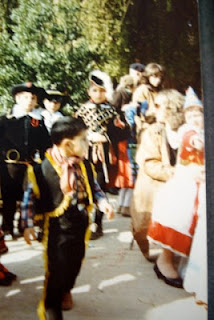 Children in the National Gardens, Athens
Note: This story was first published in the Globe and Mail, February 5, 1986.
Posted by Wynn Bexton at 12:40 p.m. No comments:

VANCOUVER FROM 1900 TO 1990: An Afternoon of Nostalgia at the Vancouver Museum 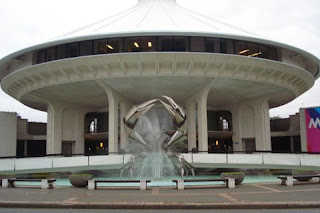 I visited the Vancouver Museum at Vanier Park on the weekend, mainly to see the neon exhibit, but was pleasantly surprised to find an excellent display of artifacts and settings from  Vancouver 1900 to 1990. What fun to take this trip down memory lane, and to see how the early pioneers lived here as well as the more familiar but almost forgotten eras of the city. 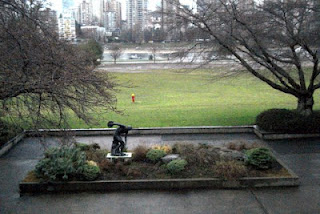 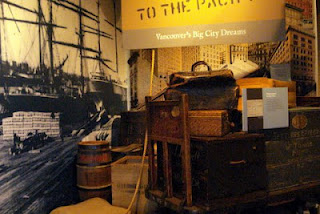 From the 1900's when the city began to be settled, there were displays for each time period that showed the life of the people at that time.  A mother pushing her baby in a pram on the street, and a wealthy woman from Shaughnessy dressed in her expensive gown, to reflections of 50's and even the hippie era. 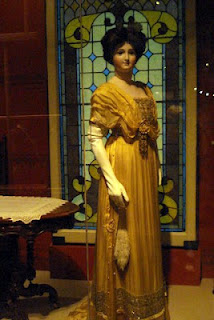 There were displays of toys, old cars, furniture, a beautiful gold plated cash register from the old Europe Hotel, and displays from the Chinese community and the internment of the Japanese. 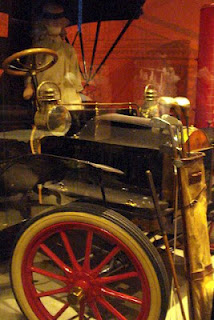 Look at the golf clubs! 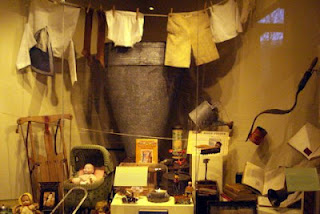 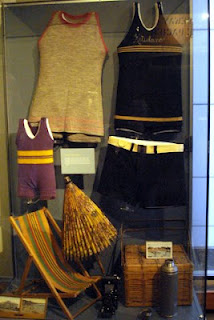 Bathing suits were rented out at the beaches!
There were rooms set up with furnishings including working TVs for various periods of times.  Here's a typical 1950's living room. 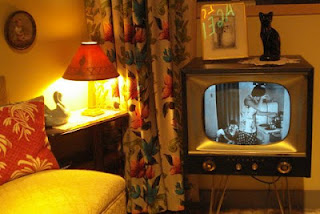 But my favorite of all was walking into a 1960's-70's hippie house.  There was even a closet of hippie clothes you could try on.  The bookshelf had all the books popular at the time.  There were all sorts of memorabalia around from the time of the Flower Children including a coffee table with all the hash pipes, rolling papers and pamphlets about LSB and marijuana.  Now that was a real trip! 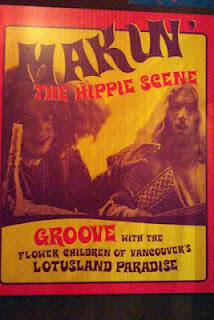 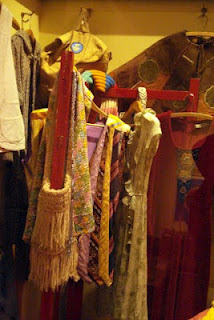 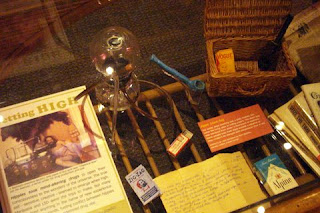 Hippies loved music!
One of the things that I really found interesting was a wooden shack that was an example of shacks built by homeless people under the viaduct.  It was a much more 'sophisticated' structure than the homeless usually have these days.  Apparantly in the '70's there was a whole 'settlement' of them living under the bridges and viaducts. 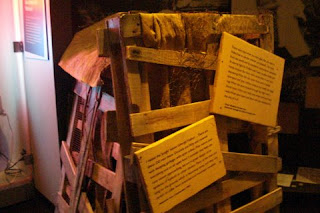 homeless person's shack
It's well worth a visit to the Museum of Vancouver to see these displays along with the neon signs that used to decorate the city.  It's a real piece of our city's history! 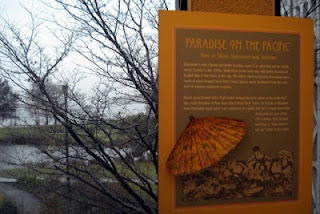 VISITING THE MUSEUM OF VANCOUVER: When Neon Lit up the City

I grew up in Vancouver at a time when the whole city was lit up with neon signs. There were, at one time, 19,000 of them.  Then, in the 1960's, people started to complain about the garish signs.  "We are being led into a hideous jungle of signs," one reporter wrote. They called it a 'neon nightmare' and said that the signs were out sized, outlandish and outrageous, 'desecrating buildings' and cluttering the streets.  And worse: they were blocking out some of the beautiful scenery of the city. 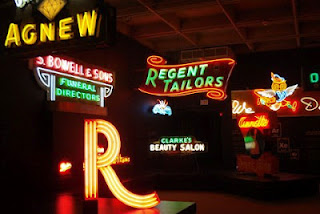 Personally, I always loved those lights.  It was exciting, on a weekend outing to downtown Granville Street, to walk along under the flashing colors.  Once they removed them, some of the 'spirit' of the downtown was removed as well.  I'm happy to see these days that neon is making a come-back, and Granville Street is starting to look more like the street I remember in the 1950's. 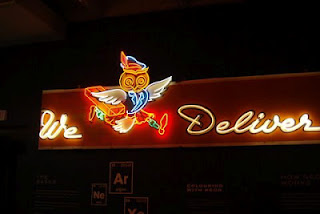 This weekend I visited the Museum of Vancouver where there is an exhibit of some of those famous neons.  There was Hootie the Owl that once perched above the Owl Drugs, and the Smiling Buddha sign from Chinatown. 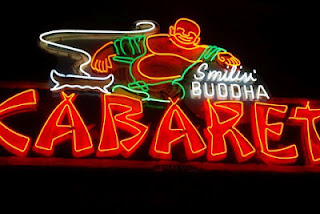 The museum has a collection of twenty three neon signs on display, only a fraction of the signs that used to flash in the city until a bylaw was passed in 1974 prohibiting them. They were collected from various locations and donated by people who had 'rescued' them.  In spite of the display being labeled
"Neon Vancouver/ Ugly Vancouver"  the lights used to reflect on our rain-wet streets, adding colour on the long rainy days of our winter.  I missed them when they were gone.  It's nice to see them making a comeback.  And it was particularly fun to go and see the old ones, as I remembered them, from those fun days when I was young promenading on Granville Street on a weekend night. 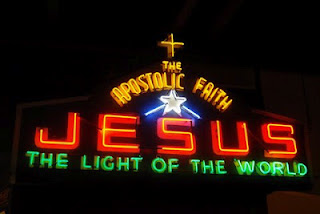 Even churches had neon! 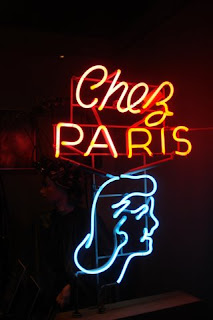 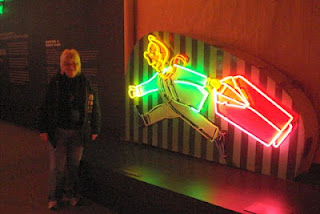