Right in the heart of Vancouver's East End is a historic lake where the community can come together for family fun, a farmer's market, and sports events.  Trout Lake doesn't have any trout, and it's not that great for swimming, but for a splendid afternoon picnic or a quiet stroll it's the perfect place. 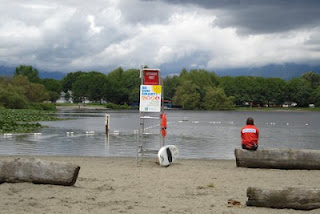 The name of the park is actually John Hendry Park named after John Hendry who owned the Hastings sawmill, one of Vancouver's first lumbering operations in the late 19th century.  The land was given to the Park Board in 1926 by Hendry's daughter who was married to the governor of the province, Eric Hamber.  She wanted the 27 hectare park named for her father, but it is most commonly known as "Trout Lake". 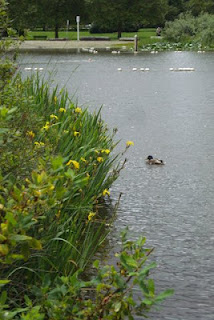 The lake began as a natural peat bog and was an important water source for the mill.  The Hastings Sawmill was one of Vancouver's most important feature in the late 1800's. 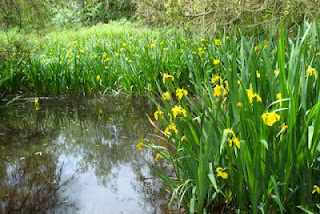 The lake is edged with stands of yellow iris and willow trees. Ducks swim among the lily pads. Although there is no boating allowed, it always seemed to me the perfect place for a leisurely paddle and I have in the past actually swam there though the water is a bit murky. 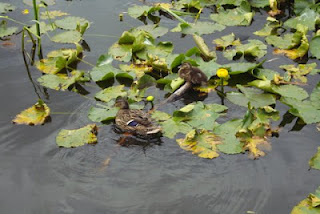 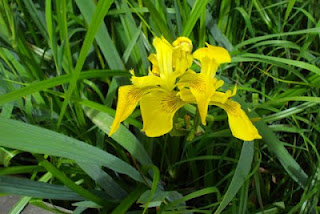 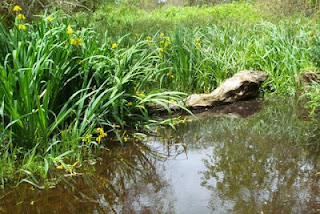 The park is a favorite picnic area or a place to stroll or jog along the lake-side paths.  I loved riding my bike around the lake. There is a playground for the children, and the Trout Lake Community Centre provides lots of entertainment including a pottery studio, fitness centre, games room, sauna, gym, and ice rink.  The park hosts a Farmers Market every weekend with local products and crafts for sale. And it is a popular place for festivals such as the Illuminares lantern festival.  This week it was the gathering place for the National Aboriginal Week celebrations. And in August the Summer Dreams Literary Festival will be held in the park. 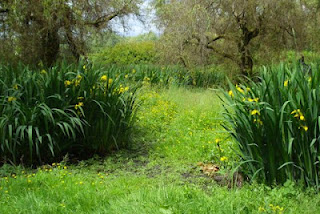 One popular feature of the park is the off-leash dog area at the north end of the lake. This is a perfect place to let your pooch run free and frolic with the other doggies. It's amusing to watch the social interaction between people's pets and of course the social interaction between the dog owners. The afternoon I was there several dogs were playing 'fetch the stick'. The 'alpha' dog had it but the others kept trying to get it away from him, in particular a tough little barky fellow who wouldn't give up the chase. 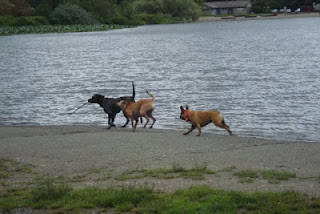 The original Grandview Community Gentre was constructed in 1963 and later renovated and renamed Trout Lake Community Centre. In 2010 the new ice rink and renovations to the community centre were completed in time for the Vancouver Winter Olympic Games. It was used as the figure skater's training venue.

How to Get There:
By Transit from downtown, #7 Nanaimo (east then southbound), get off at East 17th and walk over to the park. Or take the #7 bus from the Nanaimo Skytrain north on Nanaimo St. and access the park from E. 17th Ave.

The town of Powell River B.C. was established back in 910 when the Powell River Paper Company began building the town and constructed the dam and mill. The mill became the first and largest newsprint manufacturer in Western Canada. The town was primarily established to provide homes for the workers and their families.

My friend and I took a morning tour around the old town beginning with brunch at the old Rodmay Hotel, the first commercial building in Power River, built in 1911. The hotel was later solder to Rod and May MacIntyre in 1917, hence the name "Rodmay" 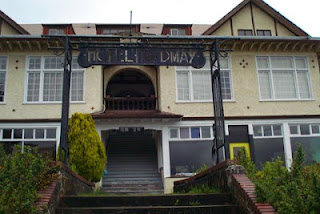 Although there have been many renovations over the years, the interior still has the same period style and elegance. 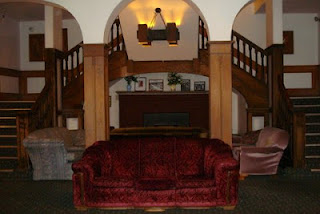 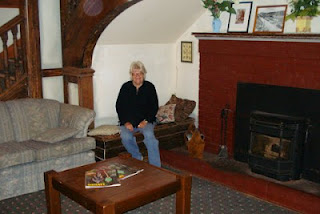 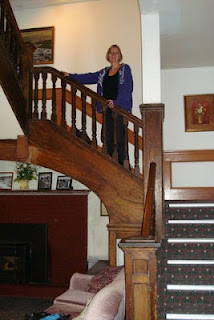 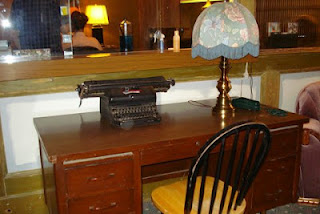 This writer spotted the old typewriter

The beautiful Tudor revival Bank of Montreal building, built in 1931 is across the road from the Rodmay and next to the bank is the Northwest Telephone Building (1931) 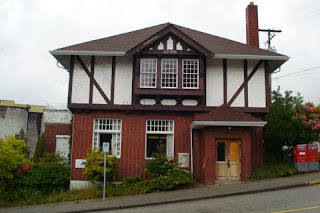 Just up the street is the former Provincial Building (1939) that cost $20,000 to build. It  housed the BC Police, courtroom, forestry service, public works, government agent, relief services, and jail cells. Since 1980 the building has been privately owned. 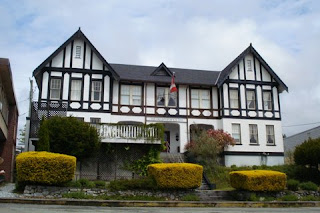 The Oceanview Apartments (1916) were accommodation for married employees of the mill, with no children. 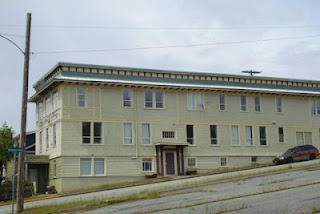 Dwight Hall (1927) is a beautiful building that served as a dance hall in the '20's. It had a spring dance floor capable of holding 800 people. Concerts, plays and social gatherings were held there and it's still the centre of many activities.  It was said to the the grandest community hall in BC at the time. 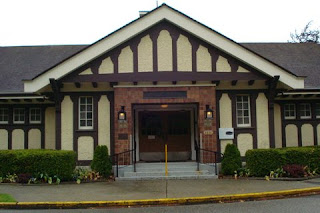 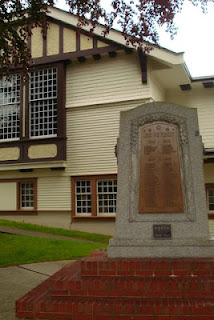 The cenotaph by Dwight Hall was erected in 1929 to honour war veterans.

We drove around the lovely residential areas of the town. Neighbourhoods consisted of workers of the same occupation with groups of houses with standard designs. The townsite streets were designed with similar house shapes on each block. Most of them are restored in good condition with little yards and gardens. 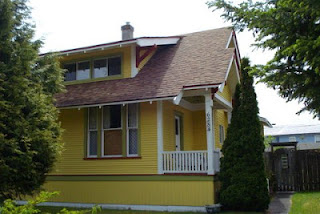 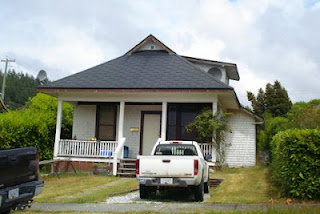 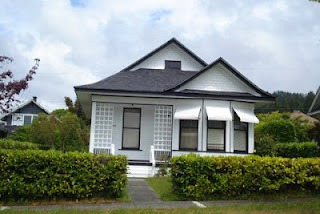 There are two churches side by side.  The St. Joseph's Roman Catholic Church, built in 1916 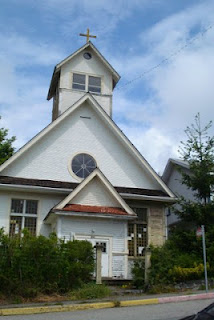 And St. John's United Church 1913. (Prior to 19210 this was known as the St. John's Union Church for all protestant congregations) 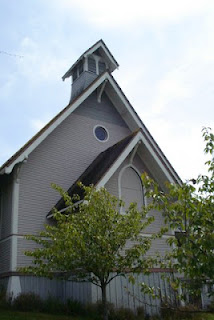 We stopped in at the local Townsite Brewery (also in a heritage building) for a taste of their excellent brews. 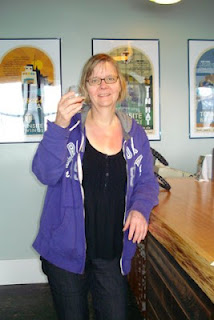 Then we headed down to the beach to check out the rusted ship hulls anchored off-shore at the port, which are used for divers. 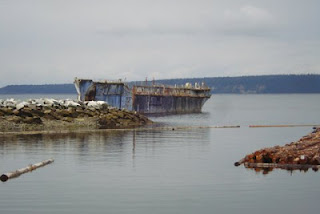 Today the mill, that once employed over 2000 people, only has just over 100 staff and Powell River has become mainly a retirement community. But it's a lovely little town, worth visiting, and there are new developments, campsites, hotels and resort all along the scenic Sunshine Coast.
We stayed at the Beach Gardens Resort and Marina and enjoyed the ocean views and tranquil atmosphere.  www.beachgardens.com