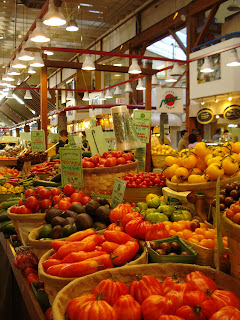 Produce at Granville Market
There are three large indoor markets in the Greater Vancouver area as well as a number of summer-time outdoor markets that are well worth visiting.

The most popular of the indoor markets is the Granville Island Market located on the south shore of False Creek. In this thriving warren of shops, artist's studios, restaurants, theatres and galleries you can find almost anything. There is not only a produce area where you can buy everything from fish to fresh cut herbs and bakery products, but various food stalls and hand-craft booths.

Once a declining 37 acre industrial park, today Granville Island is one of Vancouver’s most popular spots for shopping and browsing. Enjoy an afternoon in the sun sitting outdoors with a lunch bought at one of the varieties of food booths while you take in the scenery of False Creek and listen to the music of a street performer. Watch the kayaks, sculls and sailboats cruise by. Or enjoy a cold beer at the Granville Island Brewing Co. There’s entertainment for kids too, at the Kids Only Market and the nearby water park.

You’re advised not to bring your cars to the Island. Take public transit instead. #50 False Creek bus from downtown Vancouver (Gastown) or treat yourself to a ride on the little False Creek ferries. The Aquabus ferry runs from the foot of Hornby St. or from Science World, operating daily from the south foot of Thurlow St. downtown behind the aquatic Centre. There’s a bike trail along the south side of False Creek and a Cyquabus operating from the foot of Hornby St, for bikers who pay an extra 50cents for bikes. There are plenty of bike racks available on the Island. 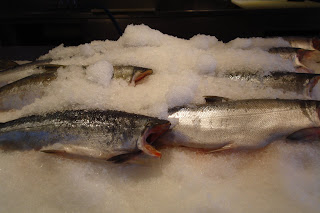 Fish, Lonsdale Quay
Across on the North Shore, you can take the sea bus over to Lonsdale Quay and visit the Lonsdale Farmers Market where you can buy fresh fish as well as home-grown veggies.
The Quay began as a boat yard in 1926 and later expanded to the Pacific Dry Dock yard which later became part of the Burrard Dry Dock. Cates Towing has been towing and building ships here since before WW1. Nearby is the historical landmark Hotel North Vancouver built in 1905. Enjoy the panoramic view of the Vancouver skyline from the quay before hopping back on the sea bus for your return trip to Waterfront Station. 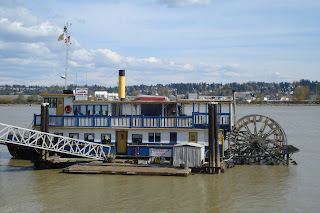 Paddlewheeler, New Westminster Quay
I spent a morning in New Westminster at the New Westminster Public Market but found it quite disappointing with many of the booths and shops closed and not much variety of fresh produce or other products. A popular aspect of the Quay seems to be the Casino next door. The most interesting part of the visit was viewing the historical aspects of the quay where the paddle wheelers are docked that take you on tours of the Fraser River. Once steam driven paddle wheelers were the main form of transportation on the river. Back in the 1800’s when there was gold rush fever, the river was a busy water-way taking thousands of miners up the Fraser. In 1858 Col. Richard Clement Moody and a party of Royal Engineers stepped ashore here to survey the site for the future city of New Westminster -- the proposed capital of B.C. Within a year 300 lots were auctioned off at an average price of $200 and the forest was cleared. Soon a town of tents and wooden stakes sprang up which included a church, hospital, jail and government house. Unfortunately most of the city was destroyed in a great fire of 1898.

ZEN AND THE ART OF ASIAN DINING 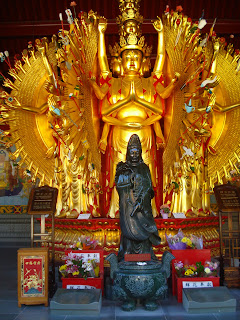 The Ten-Thousand-Hand-Ten-Thousand-Eye Avalokitsvara Bodhisattva
You may not be able to afford a trip to Thailand or Beijing, but for the price of a transit pass or a gallon of gasoline you can experience Asia right here in Richmond.

I started my Asian adventure in a meditative mood with a visit to the Buddhist Temple on #5 Road in Richmond. From the moment you enter the gates into the grounds you are transported into a serene world far from the bustling city. The grounds resemble a scholar’s meditation park with stone carvings and statues among beds of flowers and ornamental trees. Beyond the fences and bordering stand of trees, the temple’s golden-tiled curved roof rises heavenward. You pass through the gates and are transported into the old China of the past.

Inside the temple the awe-inspiring golden Ten-Thousand-Hand-Ten-Thousand-Eye Avalokitesvara Bodhisattva sits before an impressive 85 ft. long Seven Buddha Mural, the largest of its kind in the world. The temple is a masterpiece of meticulous Chinese workmanship, displaying sculptures, painting, calligraphies and carpentry. I heard one man who had been recently to China exclaim, “This is even more beautiful than the temple in Beijing!”

A highlight of my visit was having my oracle read in the room of the One Thousand Buddha Hall. With the scent of incense swirling around me I knelt at each of the stations and contemplated my question to the universe. After the ritual, an old woman holds out a bundle of sticks and I chose my fortune which is interpreted on a yellow paper.

I was on a culinary tour of Richmond that began at the Shanghai River Restaurant specializing in traditional shanghai pork dumplings, 1800 dumplings a day to be exact.
We sat at a round table and tea was poured for each guest then the pot is placed carefully, the spout facing an empty space as it’s bad luck for it to point toward a person. Traditionally, the serving chopsticks are coloured on communal tables, with plain chopsticks for each individual. The oldest male is the host of the table and the eldest person at the table is served first by the youngest female grandchild. You never serve yourself first.

The ‘little dragon dumplings’ (su lung bow) were tantalizingly delicious, filled with soup and pork. Chef Lee, was brought from China to oversee the kitchen. The menu is medium priced at $48 for a five course meal for two including handmade noodles and rice with shrimp as well as other delicacies.

At the POSH Charcoal Collaboration, a trendy bistro-style restaurant, we sampled a different menu which included a Japanese Sukiyaki Hotpot. This is one of Richmond’s newer eateries representing a change in Asian dining. POSH serves authentic Japanese sukiyaki; it’s not a fusion restaurant. The name derives from the British traveler's saying “Port Out, Starboard Home” For the diner watching their calories it’s an excellent chance to fill your plate without guilt as each plate of the fresh home-grown veggies and slender slices of meat tally up to no more than 450 calories!

Richmond has over 400 Asian restaurants and most of them have chefs imported from their home countries, thus there are more authentically Asian foods served here.

Vogue, another restaurant managed by Peter, the young restaurateur from POSH, offers 128 dishes of Taiwanese cuisine. At Jade Seafood, Cantonese-style cuisine is served including hand-made dim sums and fresh seafood that are the specialties of the house.

The young Chinese residents of Richmond enjoy gathering at the Tapioca Express Bubble Tea on Capstan Way. Here they can meet with friends and sip on a variety of tapioca milk teas or snack on crispy chicken or fried fish cakes among the other 200 kinds of tasty snacks served here. There are many different varieties of bubble tea to chose from, (the ‘bubbles” are the tapioca). The Bubble Tea provides cards for kids to play and a safe place for them to hang out with their friends. 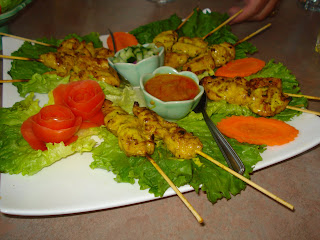 In between this eating extravaganza I took time to browse around the Aberdeen Mall and the Yaohan Centre shopping malls. I recommend an afternoon at the posh Aberdeen Mall which has a wide range of stores. It’s the first Asian mall of its kind. They even sell Porches there!
Our culinary adventure ended at the Thai House Restaurant where the chefs had prepared a full-course Thai meal that included chicken satay, artistically served salads, a seafood combo, coconut chicken and pineapple fried rice. Try the lichee and coconut drinks. They’re delicious! And for dessert: deep fried bananas with mango icecream.Yum! 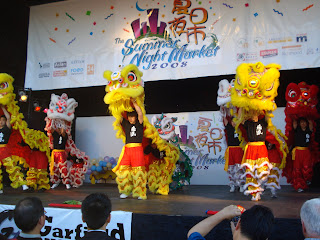 Summer Night Market Dragon Dancers
We ended the day at the grand opening of the Summer Night Market where there are over 200 booths selling every sort of merchandise you can imagine from fake designer handbags to electronics. I usually love to snack my way down the row of food stalls that offer authentic Asian cuisine. This evening, after my day-long feast, I passed it up in favour of watching the stage show with the dancing dragons and pretty Chinese girls performing for the crowds. The market is open every weekend from 7 - 11 through to September and there’s ample parking nearby. It’s worth a visit though it tends to be very crowded. The atmosphere reminds me of the P.N.E. so you’ll have lots of fun there.