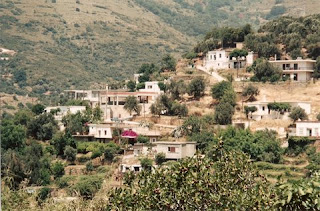 LALA, Evvia, Greece
My village
The village is hidden on the mountains five kilometres from the port of Karystos on the island of Evvia, Greece. If you didn’t know of its existence, you likely wouldn’t find it. Lala is so small, only about 100 houses, that It’s hardly even a hamlet, more like an omelette. I learned about the village from my friend Antonia, who’s village it is. So when she invited me up there one day back in the ‘80’s when I had gone to live in Greece, I took up the invitation. And that began my village life living in a little stone shepherd’s cottage.

To reach the village you have to take the ferry over to the island and then catch a bus that runs between the ports of Marmari and Karystos. Watch for the gas-station sign at the crossroads and get off, walk a half hour or more into the village along the gravel road, up the hill. This road is familiar to me. I know every curve of the road and the little bridge where a drunken shepherd once fell into the ravine, and the hidden shady place by the stream where I always rest on my way up or down the road.

As I approach the village the women come out on their porches to wave greetings. ‘Kali Mera!” They know its me, the Canadian woman who lives in the little spitaki next to Antonia’s house.

At the end of the gravel road, there’s a narrow trail leading through Lala, once just a goat trail now widened to let cars and trucks through. But it’s a dead end, going only as far as the grove and waterfall where the old mill is hidden in the shade under the big plane trees.

My little house, the spitaki, is an old stone-built cottage that dates back to 1475. The roof and floor have been repaired but the thick stone walls are still the same as the original. There’s a carved stone over the fireplace with a Byzantine cross and the date. This was the original cornerstone of the cottage. You can’t see the spitaki from the road because it is hidden, with only the roof and back wall visible. The front of the cottage looks out over the citrus groves. I can quite easily hide there away from everyone. It’s a perfect place for a writer. I feel safe and cozy here, hiding from prying eyes, alone and comfortable. It’s a good place to be away from the bustle of Athens, and I spend every weekend all the summers there living in the village. 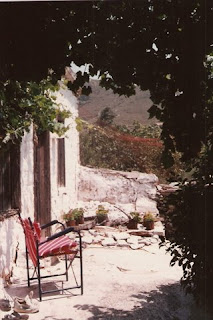 My Spitaki
One in awhile the village ladies come by to see how I’ve fixed the spitaki up, with dried herbs hanging from the rafters and the old furnishings restored. They tell me about the old woman who once lived there and died in the iron bedstead bed. (It was her husband who fell off the bridge). “She must look on you with a good eye,” the ladies say. And I believe this is true. In fact, one day a stray cat came calling and made herself comfortable in the house. I called her “Miss Kitty”. She wouldn’t allow me to touch her and she seemed very much the ‘boss’ of the house. I think she was the spirit of the old lady, Evangelitsa, who used to live there.

I love that little house and sit on the porch hidden from view, often take showers out on the porch (because the only running water is from the garden hose). How many times have I showered out there, believing I’m hiding from prying eyes? Then one day one of the village women giggles and tells me, “My husband sees you on the porch taking a shower.” And one night, as I sit in the dark watching the stars, I hear footsteps and see a man creeping up the path to spy on me. I realize I am not really as invisible as I’d thought so after that I’m careful to preserve my privacy.

Last summer I visited the village after an absence of a couple of years. It was strange, because Lala was deserted. It almost seemed as if aliens had come and taken the residents away. There wasn’t a soul to be seen. Where were they hiding? I saw some houses with shutters nailed shut and knew some of the old folk had probably passed on. But my friend Erasmia’s garden was in full bloom so she must have been around somewhere. But where was she hiding?

It gave me an eerie feeling to find the village so deserted. I walked down to the mill and up the road to the graveyard to visit the grave of my dear shepherd friend, Mitso, who had died a few years before. The graveyard was overgrown and some of the markers tumbled down. I couldn’t find Mitso’s grave. Where was it hiding? And then I saw his sister’s name on a grave and remembered that after several years, Greeks exhume the bones of the dead and move them to an ossiary. Misto was gone, and in his place was his sister who had died more recently. And I have no idea where they have hidden Mitso’s remains.

So now the village has all become a memory. I wonder if I will ever return. I had considered a trip there last summer -- hoping to see my old friend Erasmia, and another visit to the graveyard, this time to put flowers on Antonia’s grave. She was buried there just a few weeks after I had visited my last time. But somehow, due to the heat which meant it would not be pleasant hiking down the mountainside, and because my friend who would have come with me was not available, I didn’t go. And I’m not sure I ever will again.