TRAVEL PLANS: RETURNING TO MY ROOTS

On May 24 my sister, niece and I are heading off for London and Wales. We'll be staying in London for three days during which time I am looking forward to taking one of the interesting London Walks. We're going to be staying at the Indian "Y" in London, which is just across a small park from the house where Virginia Woolf lived, and nearby are several pubs where well-known writers such as Dylan Thomas, Oscar Wilde and G.B. Shaw hung out. So I will for sure go on the Literary London Pub Walk which traces the footsteps of the famed Bloomsbury Circle around the little warren of streets in the Museum quarter. Following our London visit we'll go down to Salisbury for the day to take one of the hop-on-hop-off bus tours to Old Sarum, Amesbury and Stonehenge. 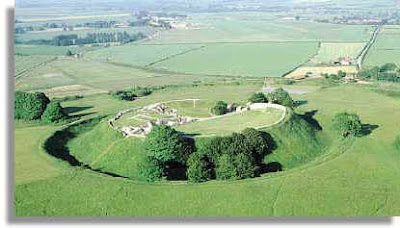 OLD SARUM
I have a special interest in Old Sarum. Some years ago I was working on a novel titled "Dragons in the Sky: A Celtic Tale". It's the first person narrative of a young girl, Olwen, who is an acolyte of the Druids. When I was searching for a location for this story, I happened to be in Salisbury en route back to London, and I noticed a sign in the bus depot saying there was an Iron Age hillfort just a few kilometers up the road. I decided to walk there. And as I approached the site I had one of those remarkable dejas vous experiences of having been there before in a past life. My novel, told in the voice of Olwen, is very much a kind of past life story -- as I I am channeling Olwen in the telling of her story. So this 'find' was very exciting to me.

I did further research and learned that this is one of the earliest settlements in England, containing evidence of human habitation as early as 3000 BC It is mentioned in some of the earliest records of the country. This means, it could very well have been a thriving settlement at the time of Olwen's life which was in the mid 300's B.C.

I made a second trip to the site a year or so later. This time I was looking for specific 'landmarks' that might tell me more about Olwen. The strangest thing happened both times I was there -- as I tried to make my way along the path at the bottom of the mound, I was held back by some unseen force, something ominous. I knew that something had happened there. And eventually Olwen "told' me what it was. She had witnessed a killing on that trail which led to her being kidnapped by the murderer, a renegade chieftain's son. Because she was a Druid's acolyte he dared not harm her but held her hostage in his flight out of the country and across Europe.

I was about half way through my Dragons in the Sky novel when I got frustrated with the writing, mainly because my writing instructor at the time kept telling me it should be written third person. I eventually set it aside and began work on Shadow of the Lion, writing it first as a juvenile historical, believing that I'd be finished it in a year and would then resume work on Dragons. Well, the rest is history....Shadow developed into a much more complicated adult historical which has consumed me and taking literally years to construct. But now it's nearly finished and I know I want to go back and finish Dragons.

In looking over the old manuscript (some of which is written in bardic verse) I realize that it could never be written in the third person, because this is most definitely Olwen's story. So now I must make another trip to Old Sarum to find Olwen's spirit. I think since my first visit there has been a lot of new digs and restorations so I'm very anxious to go back to that ancient hill fort and refresh my memory about it. This visit back to Old Sarum and Stonehenge will be a highlight of this year's travels. 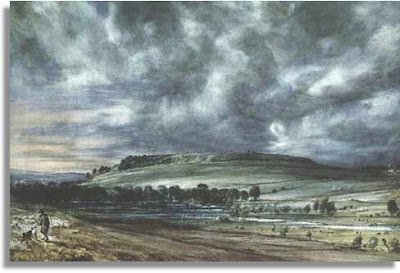 This photo captures some of the mysteriousness of the Old Sarum site, reminding me so much of Olwen and the story she told about her life there. Interesting that her life should connect with Alexander's through circumstances that developed (partly to do with that ominous event that had happened on the pathway). And so, from Old Sarum, once again as years ago, I'll be heading back to Greece pick up the threads of the rest of Olwen's story. 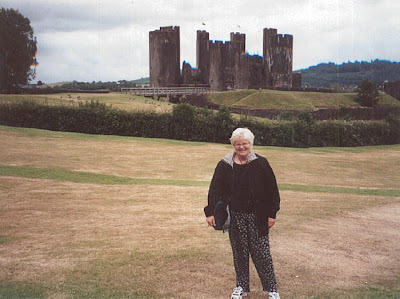 CAERPHILLY CASTLE
My father was born in Caerphilly, Wales and some of my cousins still live there. I've visited Caerphilly quite often but this year's visit with my sister and niece will be very special. We have come in contact with a lot of kinfolk through one of the long-lost cousins who has been doing the family genealogy. So we are going to have a reunion in Caerphilly of all the Filer cousins and kinfolk. I know my dad (who passed away several years ago) would be thrilled to know this was happening.
And for sure, I'll take his spirit with me. This is 'his' castle...at least, he used to play here when he was a child, so I think of it as Dad's castle. He lived just a short distance from it. Caerphilly was a mining town and from his early youth Dad worked in the mines just a few kilometers from the town. And farther north in the Rhymny Valley my great-grandfather and some of his family members (all miners) were killed in a huge explosion in the Senghnydd mine back in 1904, the year my dad was born. This country is my family's roots, and it was Olwen's too. So in returning I hope to find her, and the spirit of my family members who lived her long ago, as well as the thrill of meeting the cousins and all the new-found Filer kinfolk.

ONE MONTH TO TAKE OFF!

One month to go and I'll be heading overseas with my sister and niece. We're flying to London first, then going to Caerphilly Wales for a family reunion. On Jun 1 we head for Athens, Greece where I'll be celebrating my Big birthday with friends on the Hill of the Nymphs. I'll have lots more details about this and the other plans for Greece which include some Island hopping and a quick trip to Kusadasi Turkey.

My computer is out of commission at the moment so I can't post photos and as soon as I'm able I'll be putting up an itinerary of the planned journey which includes a side-trip for the day to Salisbury where I want to go on a hop-on-hop-off tour around Old Sarum and Stonehenge. This is a research trip to refresh my mind before resuming work on a work-in-progress historical novel I started some time ago and shelved. and in Caerphilly we'll be meeting a lot of new-found relatives. Pretty exciting stuff.

The plans for the birthday party are taking shape. My Norwegian friend Anne Britt is coming down with a group of Norwegians, my Finnish friends are coming, so is Patrick from Germany. As well the whole Athens gang has been notified.

This time my sister is coming with me as well as her daughter and it's the first time any of my family have visited Greece to see my old haunts and meet my friends there. So it will be a great occasion indeed.

Watch for more news and details of the great adventure as it unfolds.
Posted by Wynn Bexton at 3:00 p.m. 1 comment: