SEEING MY CITY THROUGH A ROVING REPORTER'S EYES 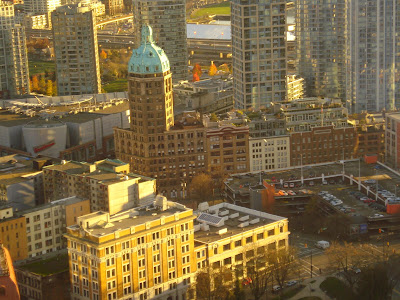 Since I began writing The Vancouver Guide for Planet Eye just over a year ago, I have been seeing the city through a reporter's eyes. This has been an exceptional experience for me, considering that back in 1953 after I graduated from high school, my first job was in that tall tower with the green dome (The Vancouver Sun tower). I worked on the 4th floor in the Editorial Department as a copy-boy (now they call them 'interns'). I wanted to be a crime reporter but ended up working in the news library. It wasn't until the early 1980's that I started putting my journalist skills to work writing travel articles. And now I have this opportunity to write four stories a week about my city for Planet Eye. I have become "The Roving Reporter". It gets me out on field trips, to see places and things I normally might by-pass. For instance, this photo (above) was taken from "The Lookout" at Harbour Centre. I have passed by there several times a week for years but can't ever remember going up to the top where you can get amazing views of the city. I went daytime and then again at night to take photos and wrote a story about The Lookout for The Vancouver Guide. I had no idea til then that it was officially opened by astronaut Neil Armstrong. I'm learning a lot about my city being The Roving Reporter! 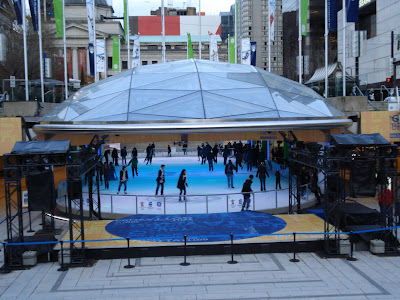 This photo is of the new GE 'Ice Palace" at Robson Square. Everything is being spiffied up around town because of the 2010 Winter Olympics and Paralympics which begins in just one month. This skating rink is free for anyone to use and it is a little gem in the centre of town. If you go at night you experience the full affect of the lights and colours. Very pretty!
It's right across from the Vancouver Art Gallery, and because I'm roving around town I've made a couple of trips to the VAG that I ordinarily would have missed. 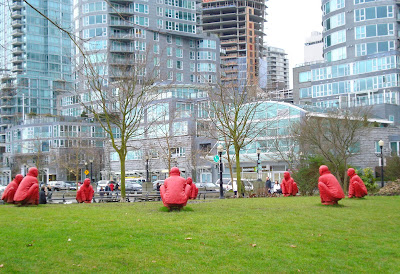 This weekend I went on a Roving Reporter walk to check out some of the Art in Public Spaces for the Vancouver Biennale. I don't know if I'd have taken the time to search for them around town if I wasn't doing a story for Planet Eye. These squatting red men are a collection of eight in front of the Westin Bayshore Hotel titled "Meeting" by sculptor Wong Shugang, one of the 32 sculptures and other art works in public places around the city.

Being the Roving Reporter has opened my eyes to new things, given my Sunday walks a new purpose, made me keep my eye open for unusual things or new places to visit. Being a Tourist in Your Own Home Town can be quite an exciting adventure!

You can read all my Roving Reporter postings about my city in The Vancouver Guide
www.planeteyetraveler.com/travel/north-america/vancouver