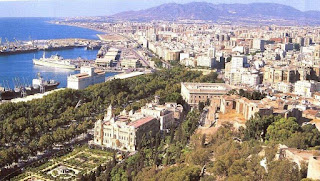 A couple of years ago two Vancouver friend, Carlos and Natalia, moved to Malaga, Spain to open an ESL school. I decided that since I'll be in Spain visiting other friends, it would be nice to stop by to see them too.

Malaga is the second largest city in the Andalusia region of Spain on the Costa del Sol (population 538,479). It is one of the oldest cities in the world, founded by the Phoenicians around 770 BC. The name derives from the Phoenician "malaka" which meant "salt" because fish were salted near the harbour here. It was under Carthage's rule during the 6th century, later part of the Roman Empire. After Rome fell, it was under the Islamic domination until 1487. During the Arabic rule the city became an important trade centre.  The city has Phoenician, Roman, Arabic and Christian era archaeological remains which interest me. 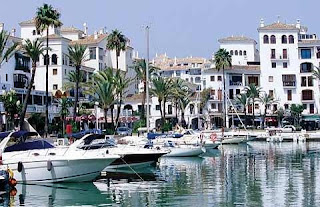 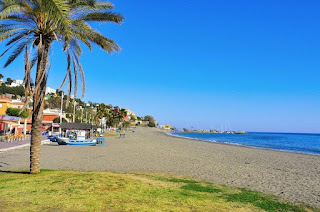 Malaga has been named European Capital of Culture for 2016. There is lots to see and do in Malaga, besides the beautiful beaches (which Natalia has promised to take me to!). There are many interesting museums (at least 30) including the Picasso Museum and the Wine Museum. The baroque Cathedral "La Mangueta" has been newly restored. There is a Roman theatre, A Moorish Alcazaba fortress (with an archaeological museum) and panoramic views from the Gibralfaro Castle.

I'll only be there for a few days but I'll try to see as much as I can while I'm enjoying the company of my friends. 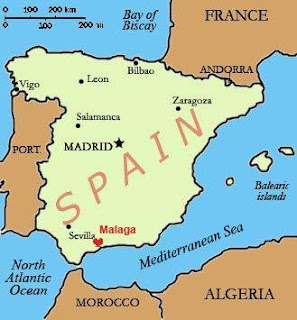 NEXT: Back to my adopted home, GREECE
Posted by Wynn Bexton at 3:29 p.m. 9 comments: 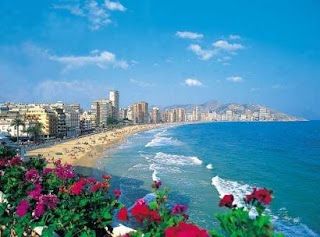 I have visited Spain previously. On one of my first trips to Europe back in the '70's my friend Rosalie and I took our daughters with us on a camping adventure to Sitges with a day stop-over in Barcelona.  Then, during the '80's when I was living in Greece, I met up with Rosalie and her friends in Spain and we went to Pamplona for the Running of the Bulls.  On that trip we also spent a day in Barcelona exploring the Gaudi exhibits and Pablo Picasso museum.  I've always wanted to go back and see more of the country. So this year, on my way to Greece, I am going to visit Spain again.

I'm flying from Cardiff to Alicante, a seaside resort city on the Cosa Brava.  My friend Inka, also a travel writer, will meet me there and we will go to her home in Torrevieja. Inka says her apartment opens up right onto the beach! 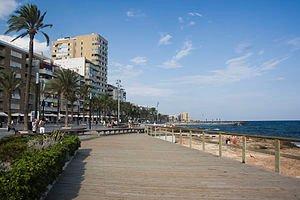 Torrevieja is a seaside city on the Costa Brave about 30 miles from Alicante.  It was originally a salt-mining and fishing village locate between the sea and two large salt lakes.  The name "Torrevieja" means "Old Tower" as until 1802 it existed as only a guard tower and a few laborer's cottages. In 1803 King Charles IV ordered that the Royal Salt Works be moved to Torrevieja and this began the history of the town. It now has a population of about 104,000.  Torrevieja is still a salt exporter and you can visit the Museum of Sea and Salt.  It's popular with tourists from northern Europe who live there including a lot of Brits. 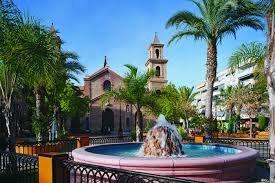 Inka promises to take me on a number of excursions. These will include a visit to a pirate's island. There is lots to see and do in the area and I'll try to squeeze as many adventures as possible into the 4 days I'll be there. Another travel writing friend, Darlene Foster, from Vancouver, lives nearby so I'll get chance to visit with her as well. 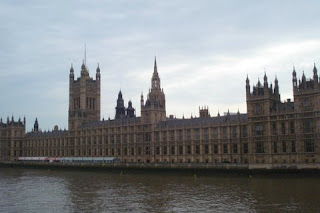 Houses of Parliament by the Thames 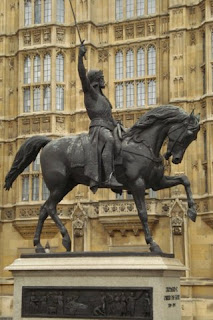 Richard the Lionhearted
'm just starting to plan my travels for 2015, leaving here August 28 with my first stop being LONDON.


I've been there so many times it's almost like returning 'home'. But each time I go I love to see new things (and there's lots to see in London!)  This time I think I'll visit the Tower of London as I haven't been for some years. And of course I'll browse around all the old familiar haunts.  I'll be staying at the Indian Y as usual (breakfast and dinner included) and it's right in the Bloomsbury area with a lot of historical houses including the one where Virginia Wolf lived which is right across the park from the Y. 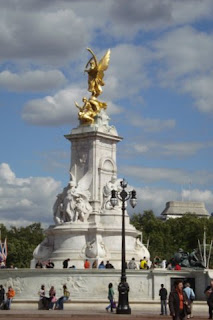 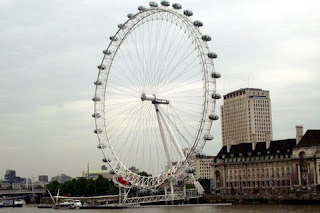 The London Eye
I always go on the London Walks and this time I notice there is one called "The Cotswold Walk" which really interests me as I haven't been to the Cotswolds for years either.  You meet a the Paddington train station and go from there for the day. These walks are always so much fun and this one sounds outstanding.

THE COTSWOLDS is an area in S. central England 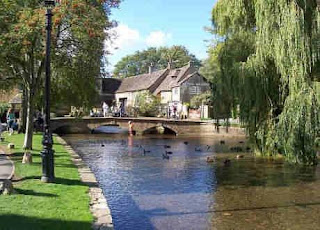 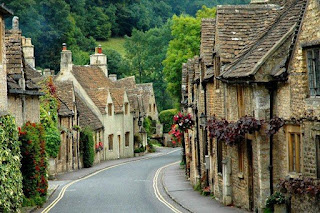 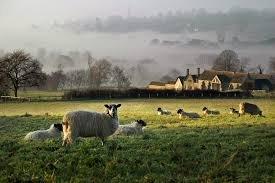 roughly 25 mi (40K) across and 90 miles (145 Km) long just south of Stratford-on-Avon to just south of Bath. The name means "sheep enclosure in rolling hillsides" ("wold" meaning 'hills')  The name is derived from the 12th century "Codesuualt" or "Cod's-wold" - Cod's is high open land (old English) or it could come from Brittonic name "Cuda"  - a mother goddess in Celtic myth who was thoughtot reside int hat area.  Cotswolds is famous for its honey-colored limestone villages.  http://coswolds.com 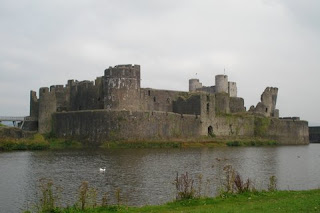 After that, I'll be heading to WALES to visit my cousins in CAERPHILLY (where my dad was from). I love going there and every time I do I visit 'my castle', the Caerphilly Castle, one of the most magnificent in the UK.  I'll only be in Caerphilly for a couple of days before heading to Cardiff to catch a flight to Alicante, Spain where my friend Inka will meet me to take me to her home town farther along the south coast to Torrevieja. 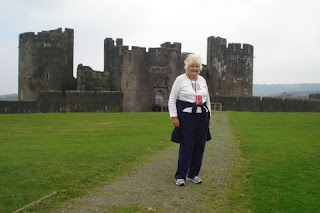 Me, in front of my castle.