The National Geographic Red Cedar
(photo from National Geographic)
The forest of Stanley Park has been home to many fabled giants. Besides the Hollow Tree, the once popular attraction of "The Seven Sisters" which artist Emily Carr painted, and the distinctive fir tree atop Siwash Rock, there was the National Geographic Western Red Cedar. The tree was named so because it was featured in the October 1978 issue of the magazine. This mighty giant had a circumference of 13.3 meters and was once one of the most impressive of the big Western Red Cedars of the park. Unfortunately it diminished over time, ravaged by storms and a lightening strike. Because it was topped by park staff, cutting it to a height of 39.6 meters the rainy coastal weather finally caused it to rot and in October 2007 it was uprooted in a wind storm. 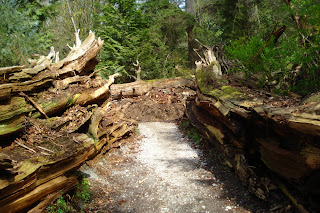 Right across the road from the Hollow Tree, there is a path leading to Third Beach. The pathway cuts right through the centre of the giant Red Cedar's root base so you can get an idea of its immense size and girth. Alongside, the massive trunk of this forest giant lies in situ. 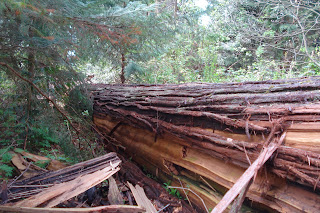 HOMAGE FOR A HOLLOW TREE 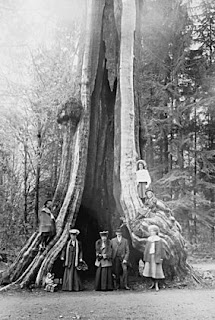 The Hollow Tree, circa 1910
(archives photo)
The famous old Hollow Tree, ne of the most famous landmarks of Stanley Park, is destined to come down. This tree, one of the Park's ancient treasures, has been a tourist and visitor's destination since the turn of the 20th century and is probably one of the Park's most photographed sites.

The venerable red cedar, reputedly over 1000 years old (older than the Magna Carta), has actually been dead for a few hundred years, and the hurricane force winds of November/December 2006 caused the supporting root base to splinter leaving the tree with a dangerous tilt. Like a famous old movie star, propped up to make her final appearance on stage, the hollow tree has been held up by cables, bolts and cement supports but now it seems futile to keep her erect. So the Parks Board has voted to lay her to rest. She'll be split up the centre so people can walk through her massive trunk and marvel at her girth and age, an ancient relic.

The tree was 12 meters around and 17 meters at the base and once towered over the other trees in the park. At the turn of the 20th century it was a popular spot to visit and photograph; at that time you could back a horse-drawn coach or car into its hollow. Now the aged tree has split even more with age and shrunk considerably. She has lost her grandeur. 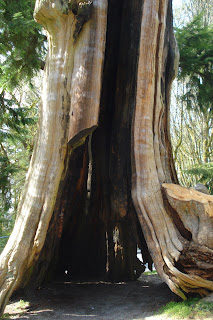 I went to pay my last respects to this old Park giant. A fence surrounds her now, but there was a man inside, an engineer who was inspecting her so see if there was any possibility of saving her. He let me inside the fence so I could have my photo taken with her one last time. It was sad saying goodbye to this grand old lady of the forest, but her time has come. 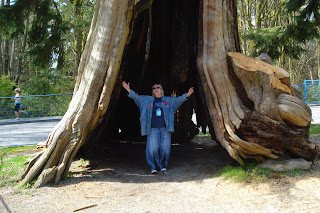