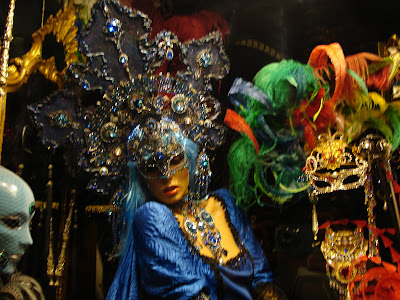 
This is a Mardis Gras memoir. I went to New Orleans for the Mardis Gras several years ago and later wrote this story about my exciting experience there. I'm posting it now as it's Mardis Gras time, Shrove Tuesday (Fat Tuesday) and all over the world, from Venice, to Rio, to New Orleans, and even in Athens Greece people are celebrating Carnival. 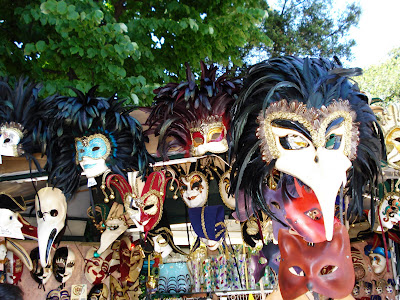 HEY MISTER, THROW ME SOMETHING: Mardi Gras in New Orleans


New Orlean's grandest celebration, Mardis Gras, was brought to New Orleans from Europe in 1870. Carnival is a mystial combination of Christian beliefs, pagan rituals, glamour and debauchery that begins twelve days after Christmas when Balls are held, hosted by the carnival"krewes" to choose the King and Queen of "misrule".

There are 60 krewes, the oldest being the krewe of Rex. The male and female members of these krewes pay up to $1000 a year for the honor and each krewe bears the cost of throw-awys, the doubloons and beads tossed to the crowds during the Carnival parades.

In February, the week before Lent, the parades being, ending on Mardis Gras -- Fat Tuesday -- with the wildest celebration of all. The song goes: "It's Carnoval time and everybody's havin' fun..." and you will have fun if you're in New Orleans for Mardis Gras.

There are things you will see in New Orleans during Mardis Gras that you will never experience anywhere else. It's one huge party, and if you use your common sense, you are sure to have an unforgettable and safe time. The balconies of the French Quarter are hung with purple, yellow and green streamers and flags, the Mardis Gras colors. the streets literally run with beer and are ankle deep with rubbish and discarded plastic cups. It's common practice in the French Quarter to carry your drinks in take-away cups from bar to bar. the official tourist drink is the Hurricane, but beer and wine flow freely too. Anything goes during mardis Gras, and the New Orleans police,who are visible everywhere, are tolerant and polite but very firm in enforcing the law if necessary.

There are several parades a day, and as the streets will be impassable, it is wise to find a vantage point for viewing well in advance. You will soon get used to elbowing your way through the crowds, scrambling up on the barricades and screaming at the passing krewes the familiar refrain: "He Mister, throw me somethin'!"
as you grab for the trinkets and beads the krewes toss. The point is to catch as many strands of beads as you can and wear them all during the Carnival. If a doubloon lands near you, put your foot on it and wait, or you'll get trampled as you try to pick it up.

The parade floats, lavishly decorated with feathers, flowers and streamers of vibrant hues, are manned by the masked and costumed krewes, and carry guest celebrities. Each krewe has its own theme: Zulu's jungle; Orpheus' music; Okeanos' fantasy sea world; Bacchus's god of revelires. There are buccaneers and clowns, snappy marching bands, and spangled majorettes. Inevitably you will see New Orleans jazz clarinestist Pete Fountain and his Hafl-Fast Walking Club, a merry band of strolling musicians.

A freezing gale howls down St. Charles Street but fails to chill the enthusiasm of the revelers. A bevy of plumbed beauties are almost blown over when the wind catches their head-dresses. Banners and streamers unfurl in the icy gusts. Specatators wrapped in blankets and muffled with scarves sip hot drinks. Som eof them have been standing in the cold for hours.

Masks and costumes are traditionally worn by revelers only on Fat Tuesday. This is the day the Monarchs come to town. The fun starts early in the morning with the Gold Nugget Festival at Woldenberg Park, the highlight being the arrival of Rex, King of the Carnival who is officially given control over the city by the Mayor.

At the corner of St. Anne and Burgundy Streets in the French Quarter, on eof the most outrageous contests of all is held. The Drag Queen Costume Contest features some of the most exotic and elaborate costumes modeled with an equal amount of pizzazz.

Down on Bourbon Street it's adult entertainment as the bartering for Mardis Gras beads between people on the street and those on the balconies begins. The traditional call of "show us you #$%" rings back and forth as particularly well-endowed women are challenged to show their comely charms.

But Mardis Gras is just one day and by midnight the party is over. New Orleans mounted policement sweet p through the French Quarter followed by the street cleaners who wipe away all traces of Carnival for another year. By morning the streets of Vieux Carre are spotless and the crowds of merrymakers have gone. You can onc eagain enjoy New Orleans in all its elegance. 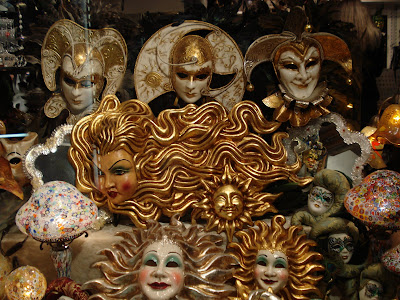 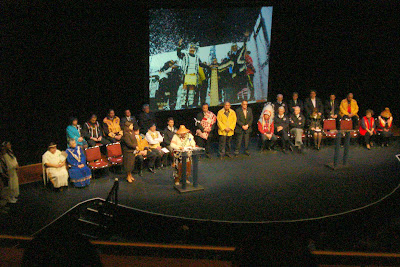 Last week I attended the official unveiling of the 2010 Aboriginal Pavilion to be built for the 2010 Winter Olympics. Aboriginal and other leaders from across Canada joined the Four Host First Nations and members of VANOC to unveil the pavilion which will celebrate the rich cultures and diversity of Aboriginal Peoples in Canada -- First Nations, Inuit and Metis. 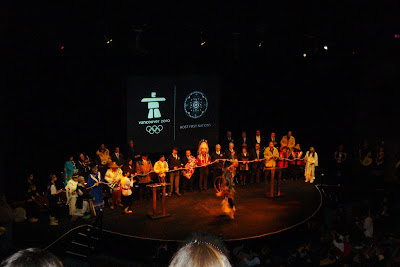 The c,000 square foot pavilion will be located on the plaza of the Queen Elizabeth Theatre in downtown Vancouver, right in the heart of Olympic activity. A 65 ft. high spherical air-supported dome will be built using the latest technology to showcase the best of Aboriginal art, business, culture and sport from every region in Canada. The site will include a long-house containing a trading post for Aboriginal arts and crafts. The adjacent restaurants will be used for hospitality events. The event has been described as “the biggest potlach ever.” This sentiment was echoed by Vancouver’s Mayor Gregor Robertson who said he saw the pavilion as “the real heart and centre and soul of the 2010 Games.”

The ceremonies included a ceremony to introduce the official Aboriginal witnesses, speeches by tribal chiefs, including the National Chief, Phil Fontaine, and other dignitaries such as Gordon Campbell, the Premier of B.C. and Gregor Robertson the mayor of Vancouver, and various elders.

There was entertainment provided by a Metis jigger, an Inuit drummer and a First Nations hoop dancer.

Every member of the audience who witnessed the ceremonies were asked in First Nations tradition to carry it home and share it with their friends and family. The four Host First Nations -- the Lil-wat, Musqueam, Squamish and Tsleil-Waututh - will welcome the world to their shared ancestral territories. It is the tradition of the Coast Salish people to welcome visitors by saying “I hold my hands up to you” and the feathers in the design of the Four Host First Nation’s logo represents this.

Because the Games will be staged on the traditional territorial lands of the Four Host First Nations people, the host nations will play an integral role in the Games. Special “theme” days will celebrate Aboriginal groups from all regions of Canada. There will be live events including Inuit throat singing, Metis jigging, First Nations hoop dancing as well as other contemporary Aboriginal performances. Visitors at the site will also experience a state of the art multi-media show projected on screens both inside and out.

The pavilion will open in February 2010 and run throughout the Winter Olympic Games.
For more information visit www.fourhostfirstnations.com and download the fact sheet 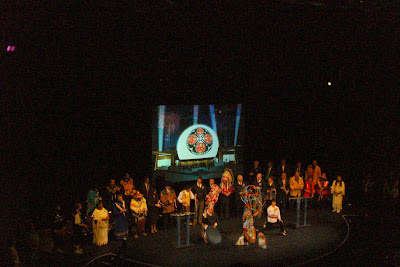