A VISIT TO SOME MYSTERIOUS LITTLE ISLANDS

One thing I love to do when I am visiting friends in Athens is to go on the Senior's Bus Tour.  These are special bus tours designed for seniors (although sometimes younger people are aboard too).  My friend Carol told me about them and last year we went on one to Euboea, crossing the island to the east coast to view towns and villages I'd never seen before We ended up on a lovely beach where we spent several hours.

These tours are like 'magical mystery tours' and usually go to destinations even the Greeks don't visit.  This year it was a trip to some mysterious islands off the north-east coast. 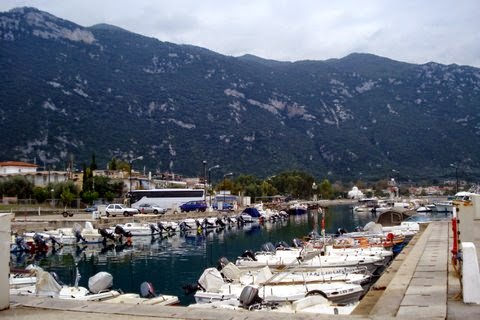 The price for these day tours is reasonable (usually about 25  Euro). We boarded the bus early in the morning and headed up the coast to a town named Kamena Vourla noted for it's resort hotels. From there we got on a boat and head out into the Malian Gulf that separates Euboea from the mainland. 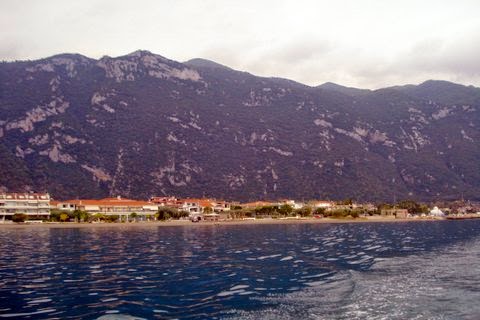 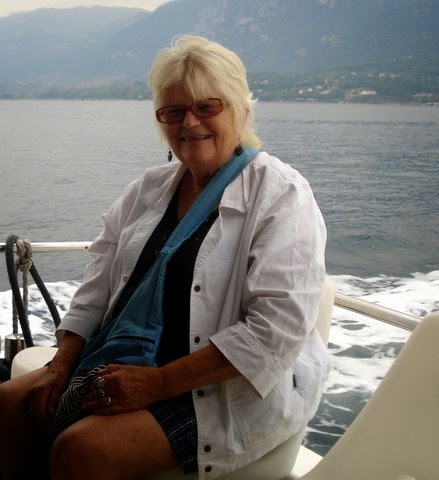 It was an overcast day which made the trip seem even more mysterious.  We were headed toward Monolia Island which is apparently steeped in legend. As the story goes, Hercules won a bride in a battle. Her name was Deianira. After a time, she learned he took another woman as his favorite. Deianira send a servant, Lichas, to take a 'gift' to Hercules. It was a cloak. And when Hercules put it on his skin started to burn and he knew it was a poisoned cloak so he threw the servant into the sea. Licha broke up into pieces and Poseidon the sea-god turned the pieces into stones and created the Lichades Islands.
Of course, more logically, these islands were formed by a prehistoric volcanic eruptions and further reshaped from an upheaval of an earthquake in 426 BC. 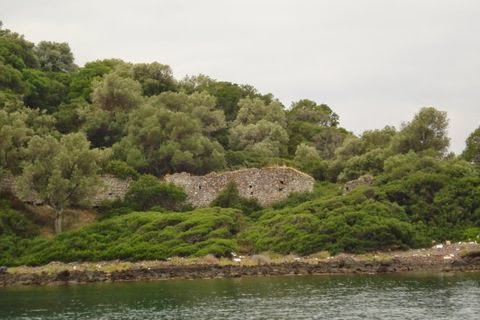 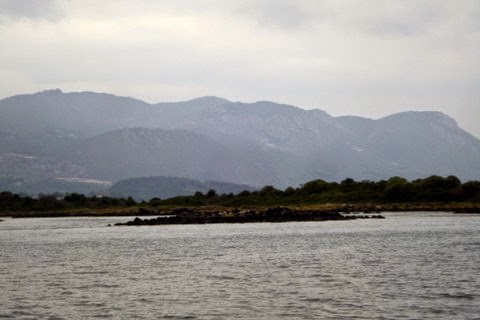 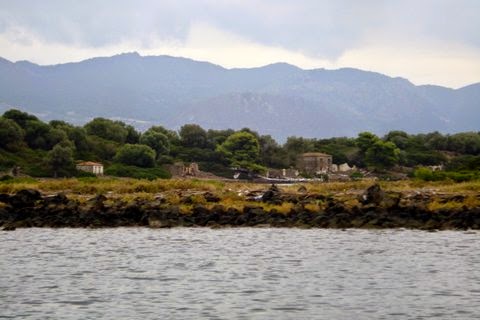 Remains of settlements.
One of the islets has some Roman ruins, another a lighthouse. There was a settlement on Monolia, and along the shore  you can see abandoned stone houses. There may be still people living there as I saw a woman on the pathway leading into the trees.  According to what I've read there are bars and pensions on the island but we didn't see them from our small boat. 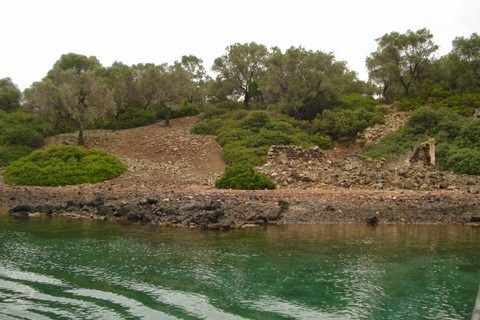 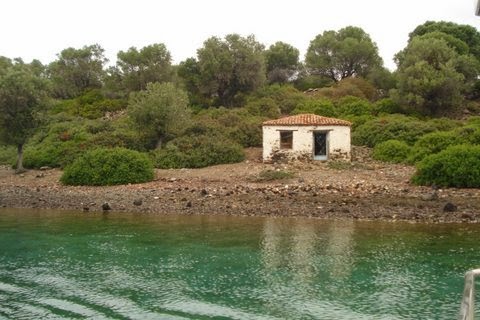 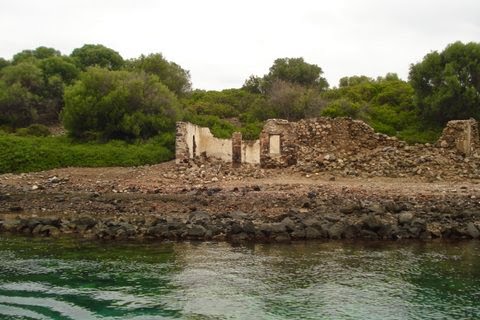 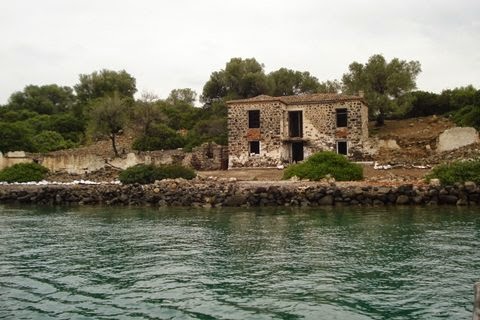 We circled Monolia and the boat anchored at Lixadonisi island where there is a small beach strewn with beach chairs, deserted on this chilly day. Usually the beach is crowded and popular with kayakers.  It was our intention to have a picnic here but the weather proved to be too inclement.  A few folks braved the chill and went swimming while the rest of us shivered on the shore. 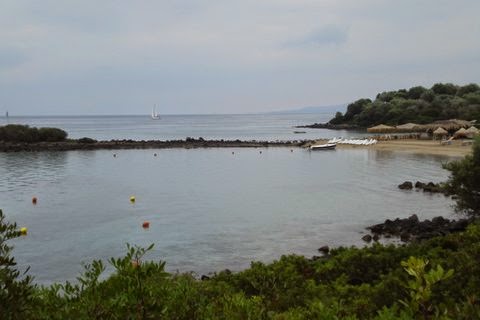 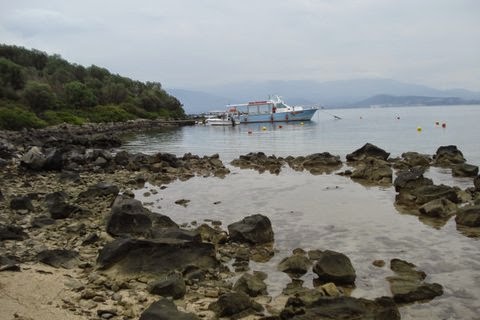 To compensate, after failing to picnic or even sight the monachus monachus sea turtles that are usually present in the area, we boarded our boat again and headed back to Kamena Vourla.  There we were treated to a buffet lunch at the posh Galini Wellness Resort  http://mapcarta.com/12868100 Kamena Vourla
http://galini.mitsishotels.com/
https://www.facebook.com/GaliniWellnessResort 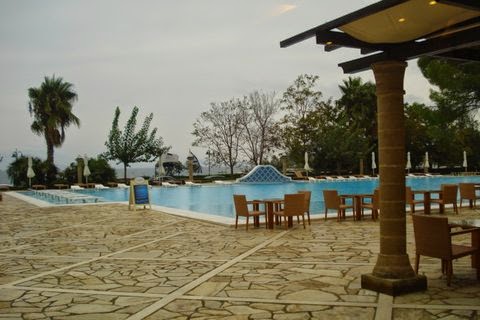 Galini Wellness Resort, Kamena Vourla
Kamena Vourla is famous for the hot springs and boasts several resort hotels. Nearby, up the hill, is the monastery of Iera Moni Metamorfoseos tou Sotiros built around the 11th century. We didn't visit the monastary but were treated to a stop at the monument and museum to the Battle of Thermopylae located nearby.

NEXT: The monument to the Battle of Themopylae.

When I first visited Athens back in 1979, it was the Plaka that attracted me most.  I stayed in an old walk-hotel on Aeolou St. and wandered the area (though for some odd reason, those first few visits I totally missed Plaka Square, choosing instead to hang out in the area around Hadrian's Library and the old Roman Agora.  Perhaps because I had made friends with the taverna workers there and they always made me feel at home. 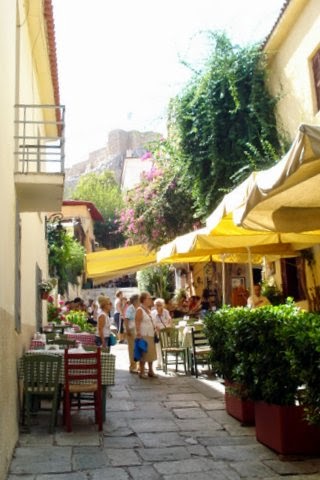 PLAKA
I decided to go to live in Athens in 1983 but a friend and I had an apartment farther away in the Koukaki district.  It wasn't until 1984 that I moved into Plaka in a basement suite at #14 Vironos St.
This appealed to me partly because "Vironos Street" was "Byron's Street" named so because at one time there was a small monastery at the end of the street where he used to stay. And right around the corner from that was Shelley Street named after Percy Byce Shelley,  Bryon's poet friend.

My suite opened to a lovely courtyard in which there was another small house (spitaki) and over the years a variety of interesting people lived there including artists and writers.  Most of my years at #14 though it was Roberto, an artist from Argentina, who became my best friend. The owners lived upstairs, Dina and Ioannis and yiayia - lovely people, so friendly and accommodating. And in another small house behind Robert's spitaki, in a back courtyard, was a workshop of one of the curator's of the acropolis museum (the old museum) where he was often restoring old statues.

Down the street at the place where Bryon used to live, there was a milk shop. The excavation on the old monastery site had caused a lot of dust so we called it "The Dirty Corner".  Right there at the corner was the old monument of Lysikratis, a tripod monument award the chorus of a drama held long ago in the ancient theatre of Dionysus.  This are, it seems, was once the theatrical part of old Athens. That suited me fine! 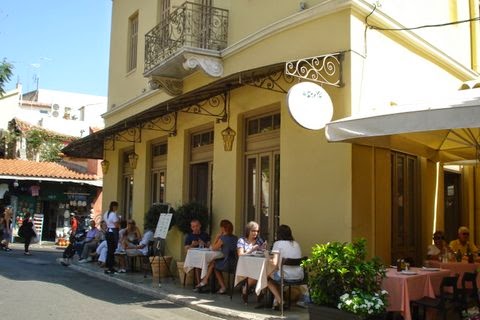 Milk shop (now a posh cafe) at the "Dirty Corner"

I still love browsing around Plaka every time I'm in Athens. It's quite touristy with many souvenir shops, tavernas and tables crowded with visitors, but it's a fun part of town.  I used to pass #14 every day I was there and look through the gate. Sadly the owners are no longer there and the last time I went the gateway was totally boarded up.  The Dirty Corner is now a rather posh restaurant. And the dust is gone from the excavations.

One of the things about Plaka is all the graffiti. This is a big thing in Athens - good or bad. I find it upsetting in some cases but in others it is attractive and artistic. Sometimes it's political slogans or people's names sprayed on the old walls, but often it is well-crafted artwork. What I don't like is when it's sprayed on neo-classical buildings. 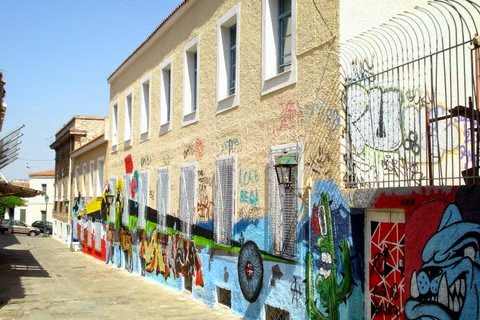 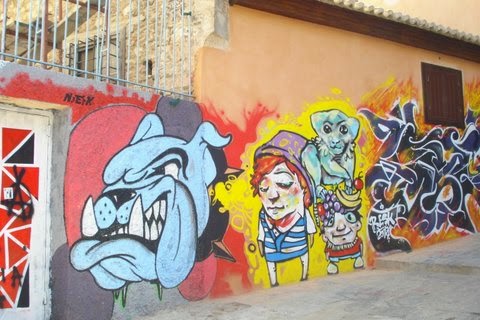 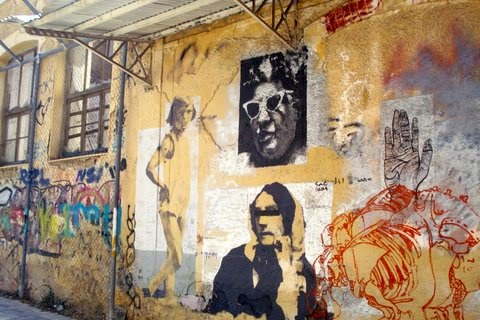 There's lots to see around Plaka from the shops to the old ruins and Plaka Square is a great place to meet up and enjoy a cold frappe or a beer at one of the sidewalk tables, or to just sit inside the square on a bench under the trees to watch passers-by. 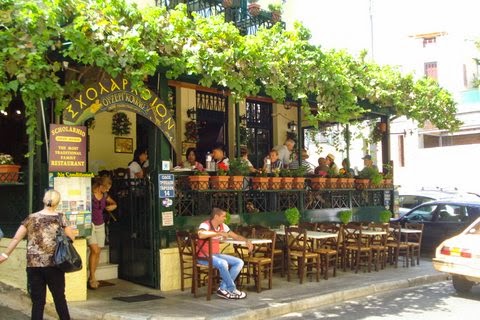 Plaka is the old Athens and that's what I like most about it -- philosophers and dramatists once walked those cobbled streets. And yes, people like Byron and Shelley too!  And once when I was sitting in Square who came strolling by escorted by her 'bodyguards', dressed all in white, her red-gold hair like a halo, but the beautiful Greek actress Melina Mercouri.  There's a museum for her now in one of the old houses. 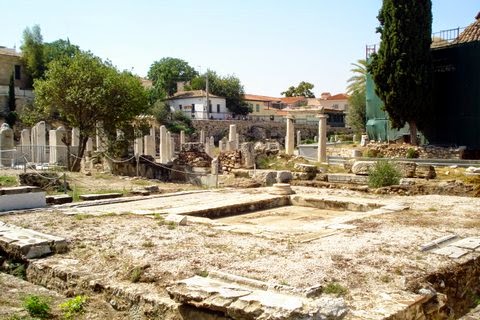 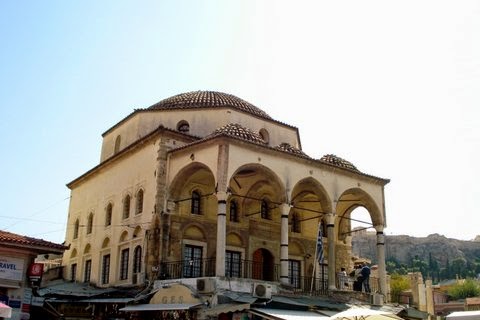 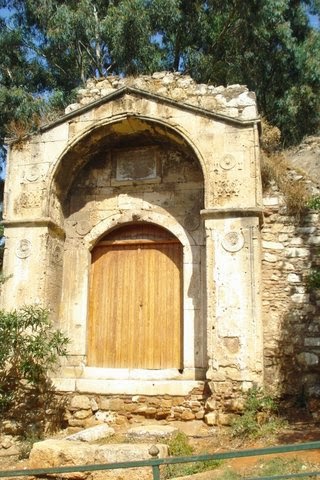 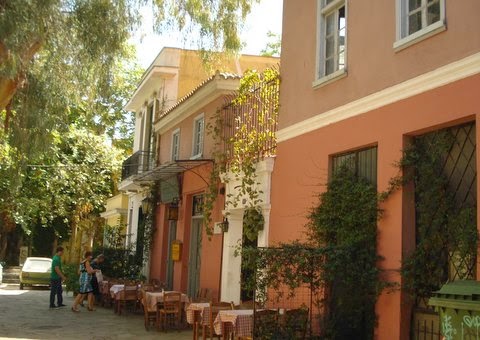 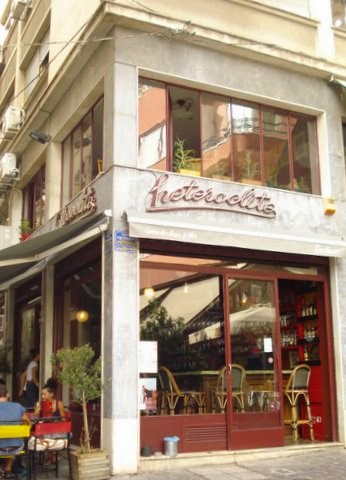 From Plaka you can visit the Monastiraki bazaar and experience some of the Ottoman parts of the city alongside the Roman.  And towering above it all is the magnificent Acropolis crowned with the Parthenon.  If you want some quiet away from the bustle of it all walk along the pedestrian roadway beside the Herod Atticus Theatre and you'll come to the tree-covered Filopappou Hill and a bit farther than that, pathways through the trees will lead you to the Hill of Nymphs, my favorite picnic spot.

And whatever you do, don't miss the New Acropolis Museum which is one of the most wonderful museums I've ever visited. I had the thrill of watching it being built from the first excavations to the shining finished product. It's all part of my old 'hood!
Posted by Wynn Bexton at 6:07 p.m. 4 comments: