This is the last part of my Seattle Adventure with a few more photos and stories about what I saw and did on my two-day visit there.

Seattle Washington is a neighbour city of Vancouver but although I've often passed through, sometimes spent a few hours browsing or shopping, I've never actually stayed any length of time. I went down on a Friday evening on the Greyhound and returned on the Sunday evening so it gave me a fair amount of time to sight-see.  My main purpose had been to see the King Tut Exhibit at the Pacific Science Center and also to browse around the Pike's Market.  It turned out my lovely five star hotel was centrally located so I could walk to many of the places I'd come to see and a short cab ride to others. 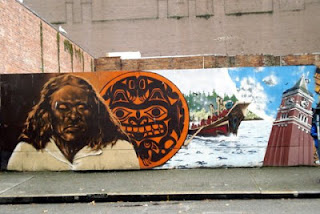 Seattle is a major coastal seaport located on Puget Sound. The name, "Seattle" comes from an Indian chief whose people once occupied that territory.  The city has around 620,778 residents (as of 2011) and is the largest city on the West Coast north of San Francisco.  Metropolitan Seattle has over 3.5 million population.  Back in the early days it was a logging town but by the late 19th century it was a commercial and shipbuilding center and a gateway to Alaska during the Klondike Gold Rush.

By the early 1900's the city was booming and it was one of the largest cities in the country. In 1913 firearm and typewriter magnate Lyman Cornelius Smith built a 489 ft. tower, at the time the tallest building west of the Mississippi. The thirty-eight storey building remained the tallest building on the West Coast until the Space Needle was built in 1962. 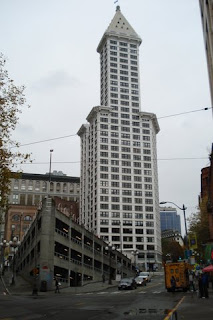 I enjoyed a tour through the Seattle Underground and the historic area around Pioneer Square where there's many heritage buildings. You'll see the old along with the new in Seattle making it an interesting city-scape. 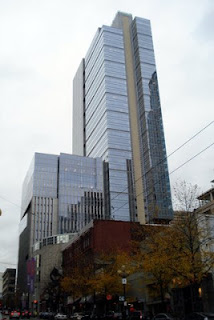 Buildings near Pioneer Square with modern sky-scraper
Seattle has an interesting musical history too. From 1918 to 1951 there were nearly two dozen jazz clubs. The early careers of jazz greats like Ray Charles and Quincy Jones were developed here. Rock legend Jimi Hendrix was born in Seattle. "Grunge" music was made famous there by groups like Nirvana and Pearl Jam. In recent years it's known for indie rock.
I found a cozy jazz/blues bar walking distance from my hotel.  The New Orleans Restaurant at Pioneer Square had a friendly atmosphere and I didn't mind going in for the evening though I was alone. I enjoyed the ambiance and felt right at home. 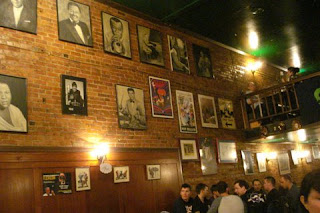 That night there was a Blues band, Gin Creek, playing — four guys and a woman vocalist.  I took in a couple of sets then meandered back to my hotel.  There'd be lots more adventures the next day. 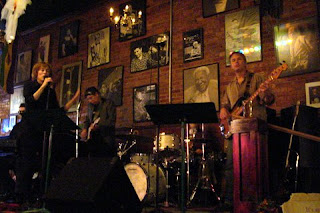 
My friend Taryn came to meet me the next morning and we set off on another adventure. First we walking through town and took in some of the street sights. 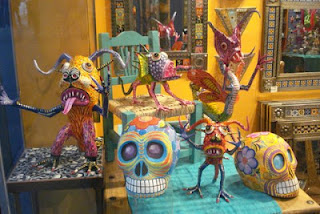 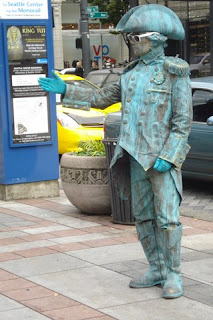 Street Mime
Then we flagged a cab and set off for Seattle Center. There's lots to see and do a Seattle Centre - 74 acres of events, plaza, parks and museum. We headed first to the Pacific Science Center to see the King Tut Exhibit.  After that we walked over to the Space Needle, intending to take the elevator to the restaurant at the top. Alas! We needed reservations so had to pass up the opportunity. 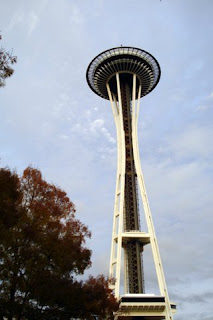 Space Needle
I hadn't seen the Space Needle since 1962 when it was first built for an Expo. We had stopped by with the kids on our way to California for vacation. It would have been fun to ride to the top but that will be on the list for my next visit.
Right next to the Space Needle is the unique Chihuly Garden and Glass museum exhibit. I took some photos of the unusual trees all made of glass that were visible above the fence. If we'd had more time we would have gone in for a closer look. But, it will be on my next visitor's list too. 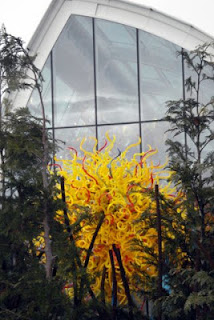 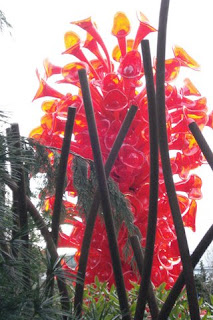 You can read about my luxury hotel stay, Pikes Market, Miner's Wharf, Pioneer Square and the Seattle Underground  and the King Tut Exhibit at Pacific Science Centre in my separate blogs.
IF YOU GO: Here's some links to help you plan your weekend trip to Seattle.
﻿
﻿
Best of Seattle (in 2 days) http://2daysinseattle.com/?utm_source=google&utm_medium=cpc&utm_term=seattle&utm_campaign=attractions
https://www.seattle.gov/visiting/
Seattle Centre  https://www.seattle.gov/TOUR/center.htm
Space Needle  http://www.spaceneedle.com/
Chihuly Garden and Glass  http://www.chihulygardenandglass.com/plan-your-visit?gclid=CJWNxeL4ibQCFQuCQgodr3wAQA
Posted by Wynn Bexton at 9:13 p.m. 2 comments: