TAKE A WALK ON THE EAST SIDE: Commercial Drive 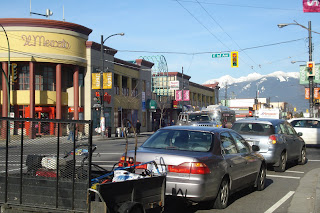 Commercial Drive, in Vancouver B.C. has been my neighbourhood since my family moved west in 1947. After the war, my father was the minister of the Grandview Baptist Church just around the corner from where this photo was taken. I attended Britannia High School, just down the street a few blocks. And I've lived near the Drive for over fifteen years so I consider it my neighbourhood.
This is a main roadway of the city through the neighborhood of Grandview-Woodland in the East End of Vancouver. It was originally a skid road for dragging logs to the harbour and was named 'Park Drive", but renamed "Commercial Drive" in 1911. Since 1891 it has been a main traffic artery, with an interurban tram line running downtown (now served by trolley buses and lots of vehicle traffic).
During the 1920's the area was the center of prosperity which declined during the Great Depression and didn't recover until after World War II. As a result, there are a great many heritage buildings in the area. After World War II many Italian immigrants settled in East Vancouver and the Drive became known as "Little Italy". There are still a number of Italian restaurants and businesses on the Drive, as well as Portugese businesses and the Portugese social club. By the 1960's Asian immigrants came to settle here. And now there are Latin Americans, East Indian and African residents. English has become a minority language in the area, according to the 2001 census, although it is still the most commonly spoken. 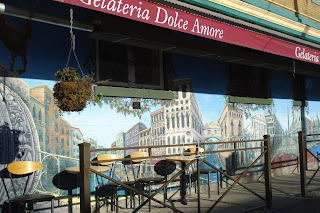 The Drive is popular for its many activities including an annual street festival and several ethnic celebrations such as the Parade of Lost Souls in October. It's also a popular place for the counter-cultures, with an annual Dyke March and the only queer spoken word and musician performance night in Vancouver. There are also venues for other literary events in particular the Slam Poetry night held every week at the Cafe d'Soleil. It even hosts a car-free festival in which 16 blocks are cleared of vehicles and thousands of people come to celebrate with walks, dancing and food. 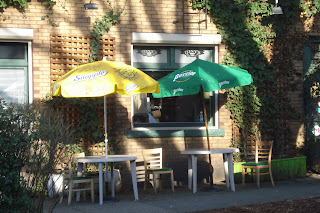 The Drive is a mixed residential/commerical area with a high number of ethnic and vegetarian restaurants and businesses. There are Edwardian-style historic buildings alongside European-style cafes. As of 2007 there were 93 restaurants on Commerical Drive and 19 of those are coffee bars. So if you want a taste of Europe and a bit of variety, come and take a walk on the East Side. I'm sure you'll enjoy my neighbourhood as much as I do!

Vancouver has one of the largest Chinatowns in North America. Besides the many fascinating shops there are many designated heritage buildings and intriguing stories behind the history of this area.

In the late 1890's early Chinese immigrants settled in are area known as Shanghai Alley and Canton Alley. Canton Alley was createdas a Chinese style coutryard surrounded by two parralell rows of buildings and the two alleys were the site of a vibrant nightlife, opera music, shopping and political and cultural activities.The new gateway entrance to Chinatown was a millenium project, part of the testament tot he early Chinese's struggles and triumphs.

Most of today's Chinese residents live outside of the downtown core but Chinatown's centre is still a busy, interesting hug, situated around the Chinese Cultural Centre on Pender Street. The Dr. Sun Yat Sen gardens are located just behind the cultural centre.

GUNG HAI FAT CHOY is the traditional Chinese greeting to celebrate the Lunar New Year. If you look at my travel web site,
www.travelthruhistory.com you will find more pictures and stories of Chinatown including the colourful Chinese New Years celebrations.