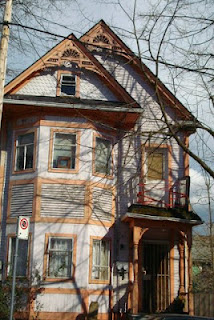 I spent a couple of hours the other afternoon walking around the streets of Strathcona, Vancouver's oldest residential district. Strathcona was largely a district inhabited by new immigrants. It was known as "the home of the working man".

The land on which this heritage area sits was once the traditional land of three Coast Salish Nations.  In 1865 Captain Edward Stamp established Hastings Mill at the foot of the present Dunlevy St. this location had been used for centuries as an aboriginal campsite called Kumkumalay ("Big maple trees")
When the Dominion of Canada was born on July 1, 1867 a whiskey-drinking rowdy Yorkshire riverboat captain, John "Gassy Jack" Deighton arrived and built a saloon for the thirsty mill hands. In 1870 this site, "Gastown" was officially incorporated as Granville Townsite. In 1887 when the first CPR passenger train arrived, Vancouver began to boom and the area now known as Strathcona became a thriving residential and business area. 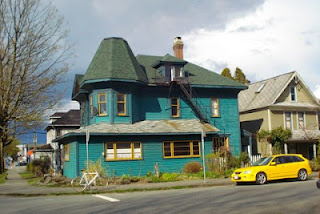 Some of Vancouver's most grand houses wee built in Strathcona and still grace the tree-lined streets, some of them restored to their original graceful Victorian and Edwardian grandeur with attention to the 't'rue colors' of that period. Many of them are now marked as heritage sites. 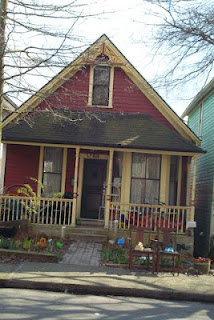 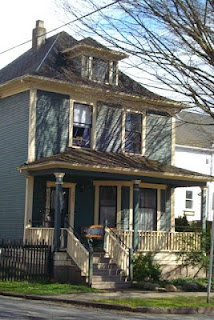 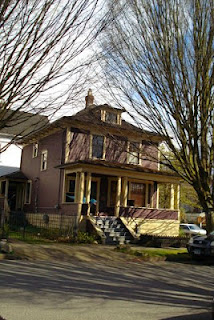 In 1907 the Jewish community established the Sons of Israel congregation and the first synagogue was built in the 500 block Heatley. (It's now preserved as a condo). 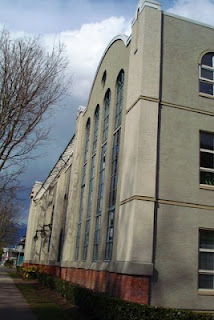 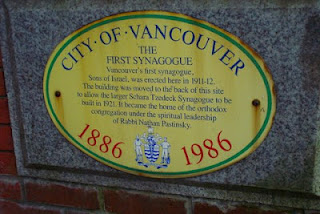 On September that same year Vancouver's largest race riot occurred with an attack on Chinatown and later Japantown over on Powell Street.  Chinatown is part of Strathcona.  Over on Powell Street in Oppenheimer Park are cherry trees, a memorial to the Japanese community that were interned during WWII.

The Sacred Heart Roman Catholic church was built in 1905 but destroyed by fire and rebuilt at 525 Campbell Ave. It was later known as St. Francis Xavier Chinese Catholic Church and is now the Korean Evangelical Church. 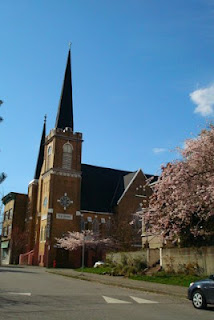 The Holy Trinity Russian Orthodox Church, completed in 1950, is at Campbell and Keefer Street.
Lord Strathcona School was established in 1891. By 1937 half the students at the school were Japanese. 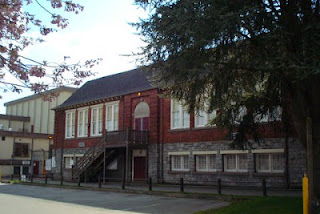 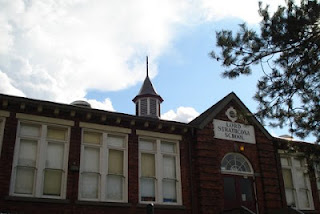 In 1911 Ross and Zenora Hendrix, grandparents of Jimi Hendrix, moved here from Tennessee and lived on East Pender St. (later they lived on Georgia Street). The area that is now Union Street was once called Hogan's Alley and was inhabited by most of Vancouver's black community.  (See my blog about the Jimi Hendrix shrine at Union and Main next to where Vie's Chicken and Steak House used to be where Jimi's grandmother was cook.) 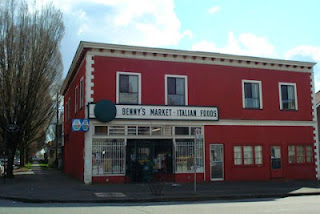 In 1908 another Italian immigrant, Peter Tosi, established a butcher shop at 550 Union Street.  Tosi's Italian Food Import Company is still in busineess at a new location, 624 Union St.  (I went to school with Angelo Tosi. He used to translate letters from Italian pen-pals for me. Today, he runs his father's shop)

In 1950 city planners proposed a new urban renewal program and Strathcona was destined to be demolished and transformed into apartment buildings and townhouses. Fortunately, the community opposed this plan and the development program was stopped.

There are still some of the old apartment buildings and hotels in the area. 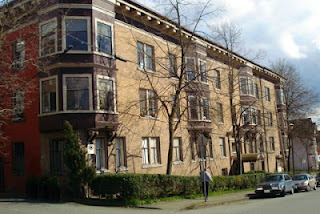 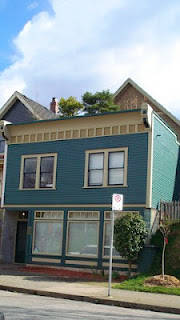 There is a strong sense of community in this Downtwon East Side area and as you walk the shaded streets you get a strong sense of the neighbourhood spirit.  In places it reminds me of parts of San Francisco. There's definitely an 'old world' feeling and it's a particular blessing to see how many of the old Victorian and Edwardian houses and other buildings have been preserved. 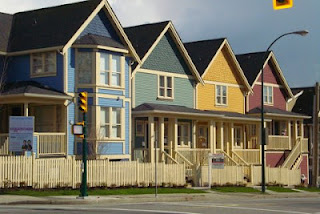 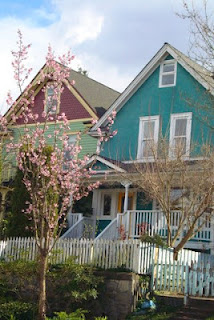 Take some time to explore this fascinating area of Vancouver. Enjoy a quiet stroll along the tree-lined streets with their curb-side gardens. You'll get a real sense what our city was like when it was first settled by immigrants arriving to begin their new lives on this beautiful west coast. 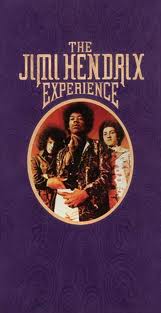 Back in 1972 when the Georgia Viaduct was built in Vancouver’s East End, it cut right through what had been one of the city’s vibrant neighbourhoods known as Hogan’s Alley.  This area was home to Vancouver’s black community and it was filled with after-hours clubs, gambling and bootlegging joints.  It was most likely named for Harry Hogan, a black singer who lived at 406 Union Street back in 1921.  At that time it not much more than a lane,  just eight feet wide and a few blocks long, mainly a collection of horse stables, small cottages and shacks. 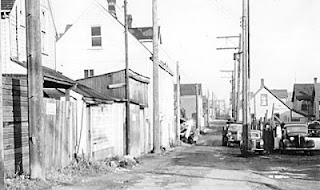 Hogan's Alley
One of the landmarks there that I still remember was Vie’s Chicken and Steak House.  Vie and her husband ran the restaurant for three decades. It was Hogan’s Alley’s most prominent black-owned business.  I might have even gone there during the 50’s or 60’s because it was a popular funky old eatery on what is now Union Street, just off Main.  The woman who worked as a cook there was Nora Hendrix, the grandmother of a young man who was to become a rock-and-roll legend, Jimi Hendrix.  Nora was born in Tennessee and danced in a vaudeville troupe. She eventually settled in Vancouver in 1911 and married Ross Hendrix.  From 1938 to 1952 the Hendrix family lived in Vancouver  and raised three children.  The youngest son, Al, moved to Seattle and married a girl named Lucille. Their son Jimi was born in 1942. 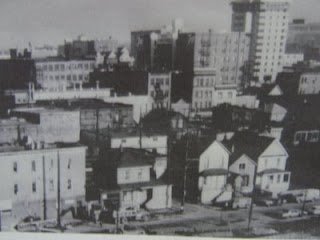 View of Vie's Chicken & Steak House
Jimi often spent time in Vancouver with his grandparents and spent time practising after hours at Vie’s.  His grandmother, Nora, was co-founder of the African Methodist Episcopal Church, a gathering place for gospel singing in this part of Vancouver. Vie’s Chicken and Steak House where she worked was a favourite hang-out for visiting black performers such as Louis Armstrong and Nat King Cole.  Perhaps Jimi might have remained in Vancouver after he’d served his time in the US army. He tried living here for awhile and played nightclubs in Hogan’s Alley. But he was discouraged by his father who told him “Vancouver people don’t like the Blues.”  So he returned to the States and the rest is musical history. Most of us probably didn’t even realize that Jimi Hendrix had spent so much time early in his music career in Vancouver. 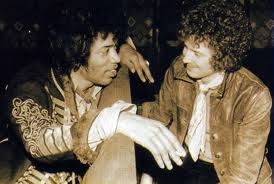 That is, until 2009 when Vincent Fodera, who now owned the property at 207 Union Street, converted a small building that was once associated with Vie’s Chicken and Steak House, into a memorial shrine to the musician.  Where the steak house was is now a parking lot, and the tiny building that houses the Jimi Hendrix Memorial Museum was likely just an attached shed. It’s located at the back of the Creekside Student Residence at 796 Main Street.  Fodera got the idea of the museum after visiting an exhibit at Seattle’s Experience Music Project in 2003.  He has collected Hendrix memorabilia including an outdoor ‘shrine’ where there are memorials to each person involved with Jimi. 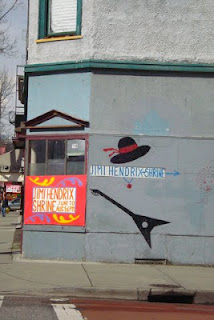 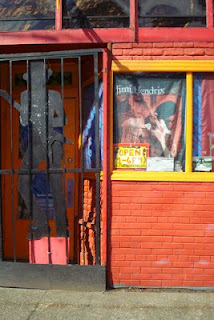 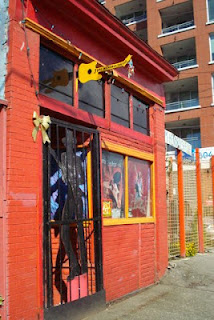 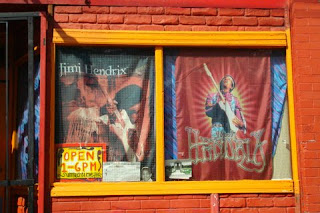 The museum was closed the day I went by. (It opens again in June), but I had an interesting chat with the gardener who was working in the yard.  During opening hours there are a number of volunteers acting as docents in the museum including local musicians and Hendrix buffs. 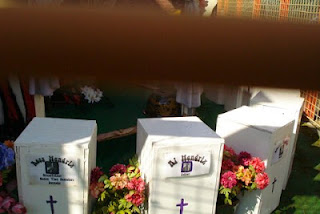 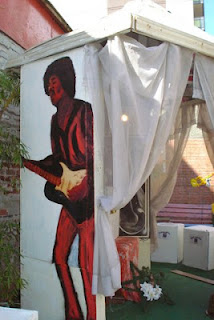 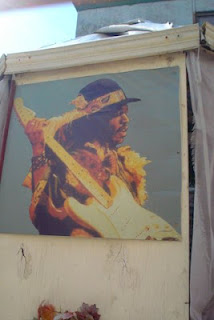 Here are three you-tube videos about the Jimi Hendrix memorial including an interview in Vancouver with Hendrix. 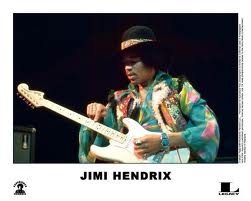