GOING FOR THE GOLD: The Olympics 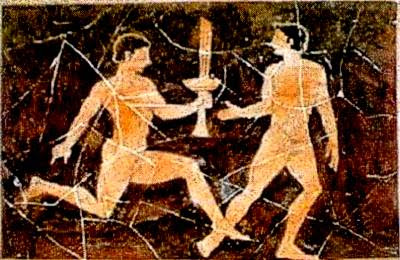 These past two weeks, the 2010 Winter Olympics were held in my city, Vancouver and the host ski resort of Whistler As in the past, athletes from all over the world came here to compete for the gold medals.

The first competition held at Olympia, was nothing to do with going for the gold. In fact, it was a chariot race that would determine who would win the hand of a beautiful princess, and inherit her father’s kingdom.

The Games were held every four years in July or August according to the full moon. It was customary to call a truce between warring city-states when the summer games were held. All feuds and differences among the Greek city-states ceased so the young men could leave to participate in or attend the games.

The stadium, which seated 30,000 people, had no seats. Spectators sat on the grassy slopes around the 183-meter oval. The athletes sole aim was to win an olive crown and the praise of their fellow man. It’s fun to stand at the starting line and dash to the finish. On a hot day, shed a few clothes or, if you’re really brave, run naked like the athletes of old did. 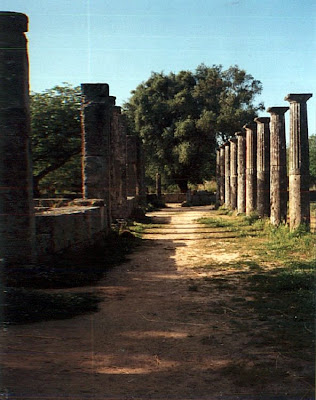 Even as it did in ancient times, Olympia makes an impact on the visitor. As you walk through the lush, tree-lined grove, you can almost imagine seeing the glistening naked bodies of young athletes exercising in the palaestra, the grand processionals making their way to the stadium, the voices cheering as the races were run. This sacred grove, known as the Altis, is associated with cult of Hera, the Earth Mother. Today, the grove, located at the foot of the pine wooded Mt. Kronos in an area of gentle hills, is again planted with cypress and olive trees. If you sit alone for awhile under the trees you will realize what the Olympic Games signified. 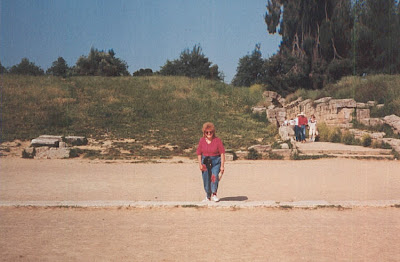 From 776 BC lists of the winners were kept engraved on stele at the stadium, and thus began the method of Greek chronological reckoning by Olympiads. Later, other sports were added such as the two-stade (stadium) race, the long-distance race and the pentathion. In the 7th century, boxing, chariot racing and the pankration were included and in the 6th century, a race with weapons. The winners received a branch of the sacred olive tree, but were also rewarded by their home cities. The Games were just for men. Only one woman was allowed to attend the
events in the Stadium. She was the priestess of Demeter who sat on her dais by the shrine opposite the tribunal of judges.

It’s easy to get caught up in the media-hype and frenzy that the modern Olympic Games create. But when you visit Olympia, you are made aware of the ideals that created the first Games. Olympia speaks to you and transports you back into the past.

The 2010 Winter Olympics are over for another four years, but a new torch relay has begun from Ottawa Ontario, carrying the Olympic flame all across Canada to Vancouver again. On March 12 the 2010 Paralympic Winter Games begin in Vancouver and Whistler. Come and support our disabled athletes as the compete for the gold.