FINDING SOME COIN TREASURES AT THE HEINRICH SCHLIEMANN HOUSE, ATHENS 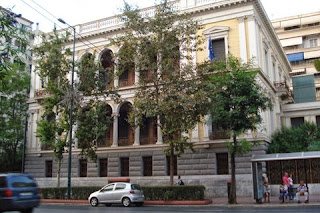 The Heinrich Schliemann House (Numismatic Museum, Athens
As long as I lived and have visited Greece, which has been since 1979, I never once went inside the Heinrich Schliemann house, although many times I have stopped on the sidewalk to admire the painted porch. But this past summer, I happened to stroll into the garden area, seeing that the front gate was open, and I discovered that on Thursday evenings there was music in the garden. This piqued my interest, so I invited a couple of friends and we went to enjoy a relaxing evening. 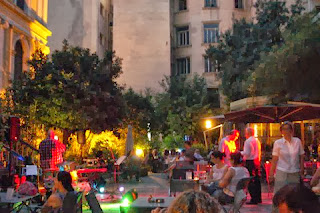 The Garden of the Muses was part of the Schliemann's estate but now it is a pleasant outdoor cafe. That night there was Brazilian music playing, a real treat as I sat and sipped a cold sangria and ate some mezes. 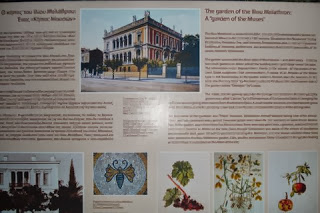 Heinrich Schliemann was the man who discovered the treasures of Troy and Mycenae, some of which are exhibited in the National Archaeological Museum of Athens. The house was built by the famous German architect Ernst Ziller and completed in 1881. It has an Italian Renaissance style later adapted to the late 19th century neoclassicism. It was one of the most elegant houses in Athens. 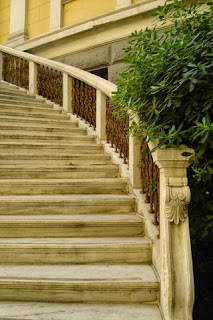 I was curious to see what was inside the house, so returned a few days later to take a look.  From the moment I climbed the marble staircase to enter the front door, I was amazed at the fantastic decor of the house, which now houses the Numismatic Museum. Inside, the walls and ceilings depict scenes copied from Pompeii.  The mosaic floors were inspired by Schliemann's excavations of Mycenae. 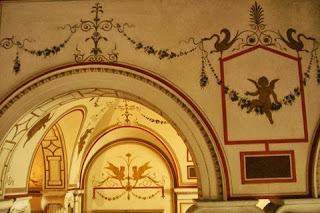 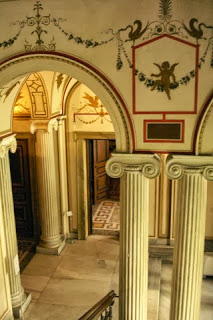 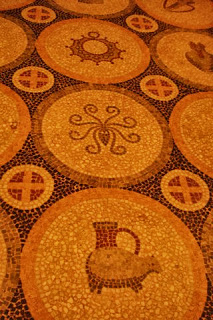 Mosaic floor
The rooms are now displays of the thousands of gold and silver coins collected or donated to the museum. This museum is unique in Greece and one of the most significant of its kind in the world. It has over 500,000 objects, coins, lead seals, weight,s medals and gems dating from the 14th century BC to the present time. 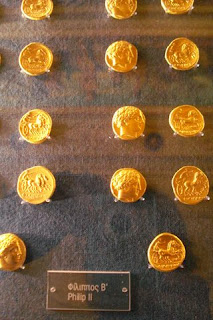 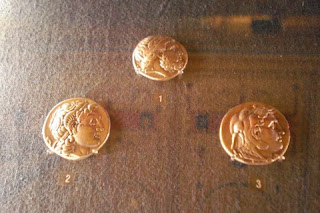 I was completely delighted to find gold staters from the time of Philip I of Macedonia and his famous son Alexander the Great.  And I even found a silver tetradrachma exactly like the ring I wear.
There were also gold drachmae issued at the time of several of Alexander's successors such as Ptolemy and Lysimachos.  Of course this interested me because of my novel SHADOW OF THE LION and all the research I had done.

I'm glad I took the time to stop and visit inside the Schliemann House.  The Museum is open Tuesday - Sunday from 8.30 am - 3.30 pm. The entrance fee is just 3 Euro (1 Euro less for seniors and students) and there are some special days that are free.  It's located at 12 El. Venizelou (Panapistomiou Ave.) not far from Syntagma Square.  Music in the garden is held during the summer months on Thursdays.   www.nma.gr

You can read a more complete story about my visit to Schliemann's House at
http://www.europeupclose.com/article/heinrich-schliemanns-house-in-athens/