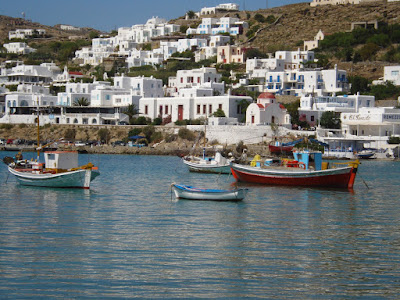 After our week of day-trips and birthday celebrations in Athens, we will head for the Cyclades Islands. First stop : MYKONOS, the post card picture island.
I've visited here several times before and this time I'm tour-guiding so I know the town and environs well. It's best to go to Mykonos early in the season, before the hordes of tourists arrive.

The town is built in a whorl of narrow laneways, originally to baffle the pirates who used to frequently raid the islands. So it gets very crowded in summer. It is also the gay island and there can be a definitely decadent atmosphere prevailing there with wild parties and other not so savory carrying on. But early in the season it is a pleasant little island to visit. So we'll stop here a day or so and then hop a ferry to continue our island holiday to Naxos. 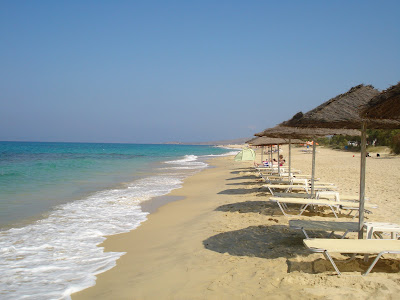 Of all the Greek islands, NAXOS is one of my favorites. In Greek myth, it's the island where Theseus abandoned Ariadne after they'd escaped from the labyrinth in Crete. There are some places on the island that give the sense of 'abandonment' as there are many 'ghost' villages, left over from when people escaped to the hills from pirate raids and also during the Turkish occupation in the 1400's.

Naxos has a distinct Venetian flavor because it was once occupied by the Venetians who ruled the waterways. So the architecture is uniquely Venetian as is the castle on the hill at the port.
One thing I like about Naxos are the beautiful beaches and this will be our 'beach' holiday. I can hardly wait to be here, at Plaka Beach, lounging on a bed under the straw umbrella and swimming in the warm sea.
From Naxos we'll head to our next island destination in the North East Aegean, off the coast of Turkey. It's been more than 10 years since I last visited SAMOS so I am looking forward to returning. This is another island with an interesting history. It also came under the domination of the Turks along with the rest of the North Eastern Aegean Island in 1453. During the 1800's the inhabitants played an important role during the Greek Revolution against the Turks.
Samos is only 1.3 miles from KUSADASI, Turkey so we'll catch the launch over for the hour and fifteen-min. ride and spend a couple of days exploring the town as well as Ephesus which is nearby. I have been to Kusadasi several times in the past, and it is no longer the small port it used to be, but rather a bustling tourist mecca where the cruise ships dock. However, it will be fun browsing the bazaars. I hope we can stay at the Stella Guest Hostel where I have always stayed when I'm in Kusadasi. And I wonder if my favorite donair place is still there near the harbour?
We'll take the local bus up to EPHESUS, which was once the most important commercial center of the western Anatolia. The city ruins are quite amazing to see. I've been here twice before and I look forward to seeing it again.
Naturally, I have more travel stories in mind from this Island tour. And I'll certainly be posting more blogs along the way. 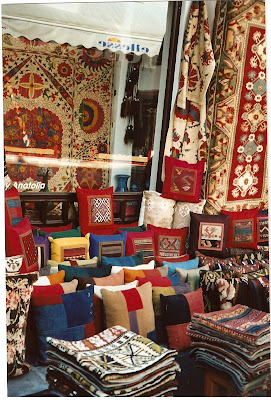 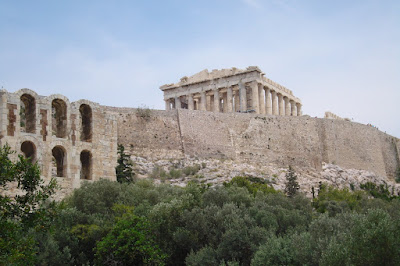 I'm heading back to Athens on June 1 and I'm so excited because this is my second home. I first began visiting Greece in 1979, landing first in northern Greece, Macedonia. I was working on my Celtic novel at the time and was tracing Olwen's footsteps as well as doing research about my historical hero, Alexander the Great.

How did Olwen get to Greece from the Salisbury Plain in England? Well, she was kidnapped by a renegade chief's son after she had witnessed him murder his favored younger brother. He left the country with her and made his way across northern Europe. When he heard about the young King of Macedon who was recruiting men for his army to invade Asia Minor and kick the Persians out, he goes with other Celtic chieftains to offer his services. They were turned down by Alexander, because he thought them too barbarian. Olwen is rescued from her captor by Alexander when he comes across them in the forest while he's on a hunt. Thus began her life in Greece and my connection with Greece too. 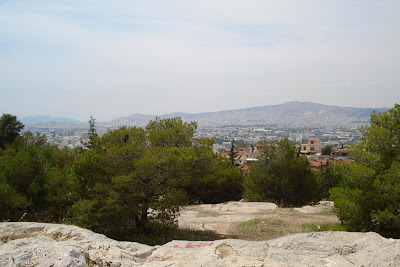 Besides going back to visit my many friends there, I am celebrating my Big Birthday in Athens on June 6. We have called it The Assembly of 2009, because we are having the sunset picnic party on the Hill of the Nymphs. I had another birthday there two years ago and it has been the scene of many sunset picnics in the past.

The three Hills of the Muses, Pnyx and the Nymphs are the scene of several battles including Theseus against the Amazons. After the Persian wars the Hills were incorporated into the City which was encircled by the Themistoclean Walls and played a defensive role when Kimon and Pericles built the Phalerian Wall and Long Walls (mid 5th c) that connected Athens with it's harbors at Phaliron and Pireaus. Two important demes were developed, that of Melite and Koile. The Assembly met on the flat area of the Hill of the Nymphs and the Pnyx. Some of the famous statesmen and generals of ancient Athens had their homes there. 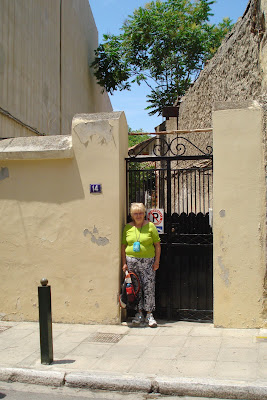 When I went to live in Athens in 1983 I first lived in Koukaki but the following summer I got a beautiful little flat in the basement of this house at #14 Vironos St. (Byron's St.) I spent several happy years living here, enjoying Kyria Dina's lovely courtyard and sharing space with my dear friend Roberto who lived in the little house out back. Every time I go back to Athens I pass by and look into the courtyard and touch the gate, with loving memories of those times and friends now gone. Kyria Dina's husband was unfortunately killed in a hit-and-run accident on a country road a few years ago, and my friend Roberto died of cancer. But this house will always hold special memories for me and I often think of it, and wish I was back there, snug in my little downstairs rooms where I was writing my novel and travel stories and enjoying the life.