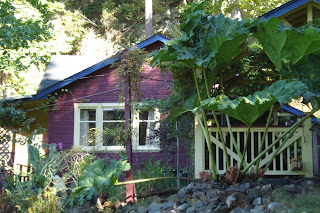 When my parents were involved in the Keats Island Baptist Camp, they met a 12 year old boy, Jimmy, who had cerebral palsy. He was a ward of the Social Services and lived in a home, like an orphanage. He had been sent to the summer camp along with several other children who were in the care of welfare. My parents invited Jimmy to spend a weekend with our family in the City. He never went back to the Home again and lived with us as a foster child until his untimely death at the age of 21 of cancer. With money from his small estate, my parents purchased an old shrimp-fisherman's cottage on the island. The house was later renovated and a porch and patio added, all the flagstones laid by my parents, the electricity and plumbing and other amenities done by my husband. My parents took great pride in the house and planted gardens and shrubs all around. Their intention was to retire there. It was unfortunate that my mother died of cancer when she was only 53 so they never realized their dream and eventually (and unfortunately) the cottage was sold.
On a recent visit, my son and I were delighted to meet the new owners and to see how well the house has been kept over the past years. We were invited inside for a look around and were amazed to find many of the furnishings the same, just as if my parents were still there (as I'm sure their spirit still is). 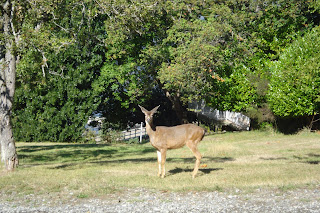 There are many deer on the island and they are not shy of human intruders. This day several deer were munching wind-fall apples under the trees on the slope. The apple trees are what's left over of the old orchards that were planted by the early homesteaders. 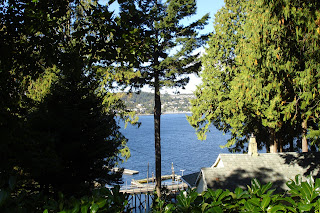 Our cottage was up on the hillside with a beautiful view of the wharves and the water.