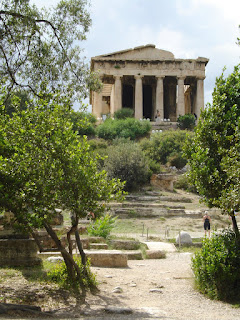 This is the Temple of Hephaestus in the Agora.
I think this is one of the most beautiful temples in Greece, and so well preserved. You can get an idea of how the Parthenon was before the roof got blown off by looking at this lovely building. The temple was built on the west side of the agora near where the foundaries and metal-work shops used to be. It was dedicated to Hephaestus, god of the forge, built about 449 BC by one of the architects of the Parthenon. It has 34 columns and a frieze on the side depicting the twelve labours of Hercules. 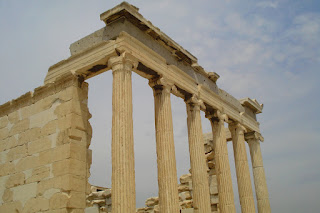 It doesn't matter how many times I have seen the Parthenon, it still gives me a thrill. They've done a lot of restoration work on it over the past few years as the marble was deteriorating. And there is still a lot of scaffolding around the structure, but it's interesting to take pictures of it from various angles. It was built around 400 BC and was the largest Doric temple ever completed in Greece. Unfortunately, during the Greek/Turkish wars part of it was accidently blown up as it was being used as an ammunition storage depot.
And later, the famous friezes were taken away by Lord Elgin. Now there's a new acropolis museum being built and the Greeks are trying to get those marbles back from England. 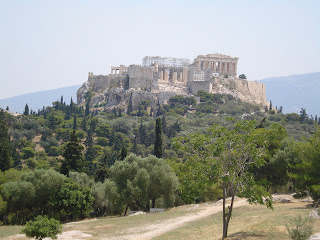 This is a view of the Acropolis from just behind the Pnyx Hill and it's one of my favorite views. I used to live just below the back slope of the Hill, in Plaka, and every day I would look up there and marvel. The "high city" was occupied from Neolithic times and people lived on the acropolis until the late 6th century B.C. After most of the buildings were reduced to ashes by the Persians on the eve of the famous Battle of Salamis (480 BC) Pericles set out to rebuild it. He transformed the Acropolis into a city of temples which has come to be regarded as the zenith of Classical Greek achievement. Interestingly, from where I took this photograph, the hill that was formerly the "deme of Melite"(the site of my birthday sunset picnic) was the location of the houses of the famous generals and orators such as Themistocles and Meltiades.